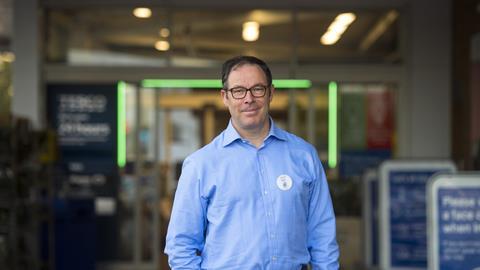 How did ‘continuity candidate’ Ken Murphy fare in first outing as Tesco boss?

The new Tesco boss said he was fully behind its EDLP push, expected the online boom to remain – and showed flashes of charisma

New Tesco boss Ken Murphy faced the press and investors for the first time this week, as he reported the supermarket’s strong first half results. So how did he fare and what are the Irishman’s biggest challenges as he seeks to follow in Dave Lewis’s giant footsteps?

War with the discounters

When Tesco launched its Aldi Price Match initiative in March, among the numerous questions asked was that of how much the incoming boss knew about the strategy. Was it a last hurrah by Lewis, or his senior commercial team. The questions seemed more pressing when in July the Grocer revealed Tesco was embarking on a fully fledged repositioning to everyday low prices (EDLP), including demanding prices from suppliers to match Aldi and the other discounters.

Murphy, however, tells The Grocer he was not only involved in the decision making but that Tesco’s move to EDLP, and improving its value proposition, is vital to his strategy. It was one of the areas he clearly felt most comfortable talking about on his introduction.

“I was kept fully in the loop of the move towards EDLP and Aldi Price Match and I’m fully supportive of that move,” he says.

He says Aldi Price Match, which now covers 500 lines, has seen positive switching results from Aldi to Tesco for the first time in a decade.

Tesco says it has cut promotional activity by 30% to 22% year-on-year and is  working with suppliers to further simplifying ranges, remove pack size variants and reduce promotions.

So, is Murphy on collision course with suppliers?

This week, brands including Hellmann’s, Magnum and Chicago Town all featured within one prime time Tesco Clubcard ad break buyout on ITV, suggesting Tesco’s plan to bring all promotions under Clubcard might not be as far-fetched as some suppliers believe.

“It’s very important that we deal fairly with our suppliers and we are looking to have more long-term partnerships,” says Murphy. “But we must be sharp on value and that can’t be allowed to change.”

No supermarket has seen quicker expansion from Covid’s online boom than Tesco, but experts wonder if Murphy can turn the emergency response into a long-term growth strategy.

The new CEO told reporters he believes the exodus to online is “here to stay” with Tesco making a record 1.5 million deliveries in his first week in the job.

Online grocery has grown from 9% to 16% of Tesco’s business since lockdown began but that does not translate into profitability.

Dave Lewis was brutal in weeding out non-profitable online ventures, most notably scrapping loss-making Tesco Direct in 2018, but also the one-hour Tesco Now service in London the same year.

But he was less successful at tackling online grocery’s intrinsic profitability issues. In July, the Grocer revealed Tesco was slapping new flat delivery fees on online orders, replacing peak and off-peak charges in a bid to boost returns. Murphy this week said profitability was on the rise, pointing to both significantly higher orders and a “dramatic” improvement in van utilisation”.

He said the launch of a network of new urban fulfilment centres could prove a “game changer”, as Tesco revealed it would open its second, in Lakeside, early next year, having opened the first in West Bromwich last month. As well as holding the promise of faster delivery times, and cost savings through semi automated picking, they provide a solution to excess store capacity.

However, the rollout was delayed by the pandemic - as The Grocer also revealed this April - and just three are planned this financial year. Twenty five are planned within three years, but even they will represent a fraction of Tesco’s estate.

“Whilst others have gone into partnership with the likes of Deliveroo, it’s noticeable that Tesco has held back. I am wondering what it might have in the wings.”

When Murphy was first announced as Tesco boss, chairman John Allan risked putting noses out of joint by claiming the internal candidates at Tesco were all “too inexperienced” to be considered for the top job, despite the former Boots boss himself having lived mainly under the radar.

Since then Tesco has lost more experience. While Lewis’s right hand man Jason Tarry has remained as UK CEO, ill health will soon see the retirement of Booker CEO Charles Wilson, to be replaced by Tesco chief products officer Andrew Yaxley, another who had been tipped for the top job. Ashwin Prasad is to step up from his current role as commercial director for packaged food to replace Yaxley.

Stewart has been widely seen as a key figure in Tesco’s financial turnaround since joining in April 2014, when he was parachuted in following the scandal over overstated accounts.

Murphy said there has been an “extensive search” to find the right successor.

He was also full of praise for the quality of the team at Tesco, calling it a “real strength.”

“There’s a tremendous depth of talent at every level.” he says.

The irony of Murphy’s arrival at Tesco is that it is widely seen as low key and unpressurised compared to that of his predecessor, who landed in the firestorm of Tesco’s financial scandal and a serious threat of the retailer entering terminal decline.

Yet as he began his turnaround, Lewis didn’t have to cope with a worldwide pandemic, the looming threat of a disorderly Brexit and saving Christmas all at once.

“What a context Mr Murphy comes into ,” says Shore capital analysts, Clive Black. “Indeed, unlike Mr. Lewis, who faced into a morass of internal strife, it is external factors that are perhaps the key challenges for his successor to overcome.”

“While he takes up the mantle against a much more tranquil internal backdrop than Dave Lewis did in 2014, he will need to cope with numerous external challenges (including COVID-19, recession and Brexit) that will require quick adoption of new policies to meet rapidly shifting consumer choices,” adds Brereton.

“Tesco are facing a price war, they are facing seasonal sales challenges, Halloween and Christmas. As soon as that’s over that he’s got Brexit and that’s not taking into account any further panic buying from Covid.

”It’s going to be a huge challenge for Murphy to just get through unscathed in the next three months. The only way they do that with suppliers, which is why retailers need their suppliers now more than ever.”

How did the new boss perform in his first test?

Murphy described his first week at Tesco as living in a “whirlwind” but appeared unruffled by the questions fired at him on day one from the nation’s press corps, even if he did often hand over to outgoing CFO Stewart for answers requiring detail. Painting himself as the “continuity candidate”, Murphy said his priority was to “meet as many colleagues and visit as many stores as possible.

“I’m really happy with the strategy of the company,” he says.

“My job is to maintain momentum and keep us focused.”

”My job is to maintain momentum and keep us focused”

Of course, there are challenges ahead - not least Brexit - keeping the good work going will only wash so long. Murphy will be expected to put his own stamp on Tesco strategy sooner rather than later.

But there was enough of a glimpse today to suggest, as Lewis himself predicted, that Murphy will prove to be a charismatic leader.

Particular highlights were his assurance that Halloween would go ahead as planned because “you try telling a 10 year old that Halloween is cancelled” and that Christmas might not be the home alone with the miniature turkey affair some are dreading, on the grounds that people will want to  “celebrate still being alive.”