Shareholders accuse Tesco of failing in fight against obesity 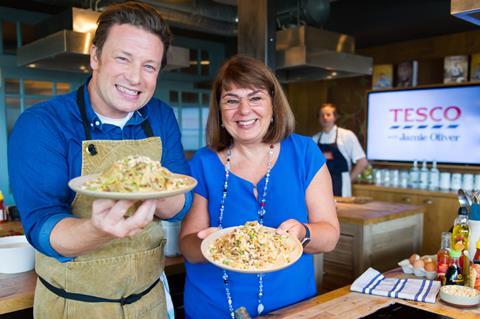 Tesco is facing a revolt from a coalition of institutional shareholders who claim it has been left trailing by other supermarkets in the fight to tackle obesity.

The shareholders have aimed what they claim is the first health-based resolution at a FTSE100 company, calling on the UK’s largest food retailer to set targets to increase the proportion of healthy products on its shelves.

The resolution is being co-filed by institutional investors including Robeco, JO Hambro, and Guy’s & St. Thomas’ Charity, as well as more than 100 individual Tesco shareholders and will be voted on at Tesco AGM in the summer.

It claims Tesco, with a 27% share of the market, has not made “any significant commitments or progress” in making its products healthier, despite obesity being a proven risk factor contributing to deaths in the Covid pandemic.

The rebel shareholders include Guy’s & St. Thomas’ Charity, which has previously been involved in trials of so-called “nudge tactics” with Tesco to try to tackle obesity.

In October The Grocer exclusively revealed how a pilot by leading supermarkets and suppliers in London, backed by the charity’s Collaboration for Healthier Lives UK (CHL UK) programme, had shown promotions to make healthier food cheaper could lead to double-digit increases in sales.

However, the project was hamstrung by what it claimed was a “lack of commitment among retailers and suppliers”, as well as being hit by the impact of the coronavirus outbreak.

In one trial, Tesco promoted fresh fruit and veg as part of its Fresh 3 scheme, which was later rolled out nationally, and over the intervention period (May to November 2019) sales of fruit and veg rose 13% year on year.

However, Tesco suspended the promotion because of the coronavirus crisis.

Today the shareholders’ group claimed Tesco had not yet implemented any of its nudge policies on a broader scale.

It also took aim at Tesco’s Little Helps to Healthier Living programme, which launched in 2017, saying it lacked the transparency and clear targets of heathy eating programmes such as M&S’s Plan A.

In 2018, then-Tesco CEO Dave Lewis urged suppliers to slash the price of healthy products in a bid to help the supermarket fight obesity, with the supermarket launching its five-year Little Helps to Healthier Living strategy with Cancer Research UK, Diabetes UK and the British Heart Foundation – with the charities at the time describing it as a landmark move against obesity.

“Supermarkets, and in particular their keyworker staff, deserve credit for working tirelessly throughout the pandemic to keep food on the shelves,” he said.

“However, the companies also have a responsibility for the health impacts of their product ranges and marketing efforts.

“As the UK’s largest food retailer, Tesco’s actions are of systemic importance in tackling obesity. But its prime market position has not yet translated into leadership on this critical issue. We hope Tesco’s board will endorse the resolution and grasp the opportunity to help build a healthier UK post-Covid, while also improving its financial sustainability in the long-term.”

“Supermarkets like Tesco have a significant opportunity to show real leadership by disclosing and, where needed, improving their efforts to help families to keep healthy,” said Kieron Boyle, CEO of Guy’s & St Thomas’ Charity.

“This would build on Tesco’s market-leading work chairing the Collaboration for Healthier Lives that trials what positive retail and manufacturing changes look like in practice. We look forward to engaging with them and others on this topic.”

A Tesco spokeswoman said: “We are working hard to make it easy for our customers to make healthy choices, and we have set very clear targets on health and sustainability, published in our Little Helps Plan.

Our reformulation programme has already removed more than 50 billion calories from our products since 2018; our ‘helpful little swaps’ events offer healthier alternatives to family favourites at the same price, and we have given away more than 100 million pieces of free fruit to children. We have also announced a target to increase sales of plant-based meat alternatives by 300% by 2025, and were the first retailer to set a target of this kind.

We keep our targets under review to ensure they are sufficiently stretching, reflecting feedback from a wide range of stakeholders, and will share our latest health ambitions ahead of publishing our next Little Helps Plan update.

Looking forward, we have strong plans to make Tesco the easiest place to shop for healthy and sustainable food, to encourage increased consumption of fruit and vegetables, and to raise awareness of healthier choices.”