Tesco fulfils one million grocery deliveries in one week 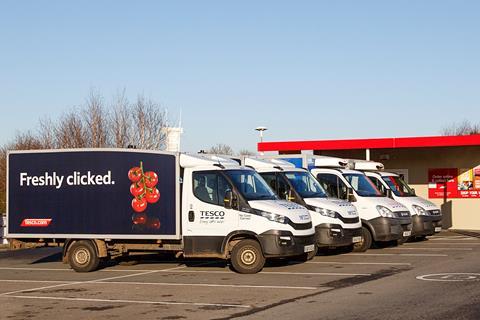 Tesco has become the first retailer in the UK to fulfil one million online grocery orders in a week, days after the government admitted online capacity would not be able to cope with demand despite the huge ramping-up of services.

The supermarket giant said it aimed to reach a capacity of 1.2 million weekly delivery slots - double the number of slots at the start of the Covid-19 crisis - in the coming weeks.

Tesco said it had now hired 4,000 new drivers and 12,000 new pickers since the outbreak began.

Yesterday alone, Tesco said it picked more than 10 million items in a single day for the first time.

Tesco’s one-millionth order was delivered this week from its Enfield customer fulfilment centre.

“Now, more than ever, it’s important we do everything we can to help people get access to food, particularly our most vulnerable customers,” said Chris Poad, MD online. “We’ve rapidly changed our online business to help create more slots for people that need them most - from recruiting thousands of new colleagues to changing the way we pick and pack orders. We know there’s still more we can do and we’ll keep working hard to find ways we can serve even more people through this time.”

The milestone for Tesco comes after environment secretary George Eustice admitted on Sunday that supermarket online deliveries would not be able to cope with demand from millions of vulnerable shoppers, despite their efforts to scale up.

The Defra secretary said yesterday in the Downing Street coronavirus briefing that the huge increase in capacity would “still not be enough” to meet demand.

His admission came after The Grocer revealed last week millions of vulnerable people at risk of going hungry are to be redirected from supermarket websites to an army of local volunteers who will do their shopping.