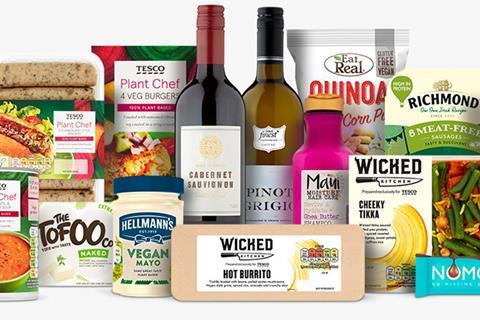 Tesco has said its Veganuary event was its biggest ever with sales up by more than a third on last year.

The supermarket said it had also seen as sharp rise in demand for low & no-alcohol products, despite the strains the pandemic has put on many households’ Dry January intentions.

“The last year has seen some truly ground-breaking and tempting new plant-based foods come on the market which have encouraged more people to go vegan, whether full-time or as part of the Meat-Free Monday campaign,” said Tesco head of plant-based food innovation Derek Sarno.

“At the beginning of this month we launched our first plant-based bakery lines and the recent extensions made to our chilled, frozen and dairy vegan ranges have been the reason why we’re seeing such strong demand.”

Meanwhile Tesco said during Dry January demand for low & no-alcohol spirits “rocketed” by more than 50%, while sales of low & no wines were up by 40%.