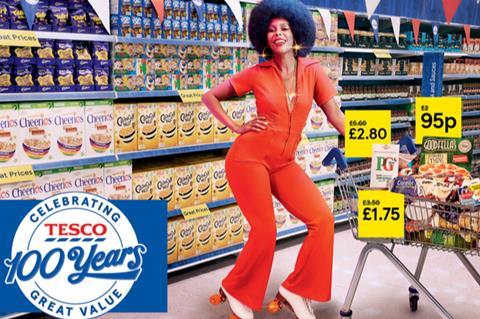 Tesco has remained the biggest advertising spender in the UK grocery market in 2019, while Sainsbury’s went on the offensive with a more than 82% increase in marketing spend, according to data from Nielsen AdIntel.

Tesco, which held the top spot for grocery retail in 2018, celebrated its 100th anniversary in 2019 and increased its traditional advertising spend from £74.8m to more than £80.8m.

Asda and Lidl maintained their second and third positions respectively, despite both decreasing spend (Asda by 4.9% to £65.3m and Lidl by 11.0% to £54m).

Sainsbury’s was the most significant mover in the market last year, with spending across the traditional channels up 82.6% to £51.9m, compared with just £28.4m in 2018. The increase was mainly down to the supermarket’s big 150th anniversary campaign ‘Proudly doing our bit’. This included its ‘Nicholas the Sweep’ Christmas ad, which made a nod to its 1869 founding date.

In terms of advertising spenders overall, Sky was the UK’s biggest in traditional advertising in 2019, increasing its investment 44.1% to £178.8m. McDonald’s, which came third in 2018, increased advertising significantly by 23.7%, taking the overall second spot ahead of Procter & Gamble, which had the biggest decline of the overall top spenders (-26.8%).

“However, there was less consistency across the supermarket chains in terms of traditional advertising spend overall. As Aldi, Marks & Spencer and Iceland invested more, while Asda, Lidl, Morrisons, the Co-operative and Waitrose all shifted budgets away.

“Many grocery retailers are choosing to experiment in other channels, while some have reinvested back into traditional media as a trusted way to reach their consumers. It will be interesting to see which way this shifts throughout 2020.”