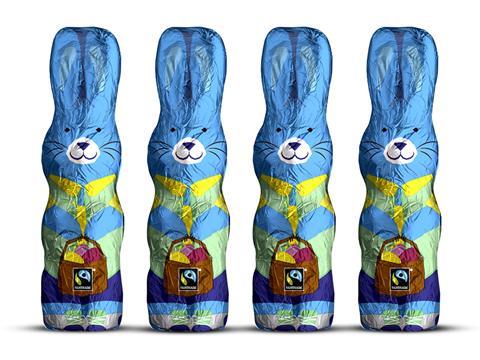 The Co-op was today at the centre of a criminal investigation over serial food tampering after it was forced to recall hollow milk chocolate Easter bunnies, following the discovery of a potentially dangerous battery hidden inside.

The National Crime Agency has been called in after the alleged tampering incident in Nottingham.

The retailer said more than 3,000 units of the £1 product had been sold nationwide but that no other products had been affected.

It is the second alleged tampering incident to hit Co-op chocolate novelty products in recent weeks, following a national recall of chocolate Santas before Christmas after two cases where batteries were found inside the chocolates.

The Food Standards Agency has also been notified and is assisting with the investigation.

“The health and safety of our customers is uppermost in our minds. We are concerned about one incident of alleged product tampering involving our hollow milk chocolate Easter bunny foil figure, which has been found to contain a small battery inside,” said a Co-op spokesman.

“This follows an incident at Christmas when two similar products were targeted and contaminated. As a precaution, we have begun a UK-wide product recall and have withdrawn the product from sale. Customers with one of these products should not eat it but take the product back to store for a full refund.”

The investigation came after shopper Tammy-Louise Dundon bought one of the bunnies for her daughter.

She told the Nottingham Post that her child had already bitten the ears off the rabbit, when she found a single-cell battery, similar to those found in hearing aids, inside.

“I was just like: ‘Oh my God!’ How much damage do these batteries do? I’ve heard kids have died from eating them. They can get stuck in the oesophagus or can be corrosive,” she told the newspaper.

The Co-op anyone concerned should call its customer services on freephone 0800 0686 727.