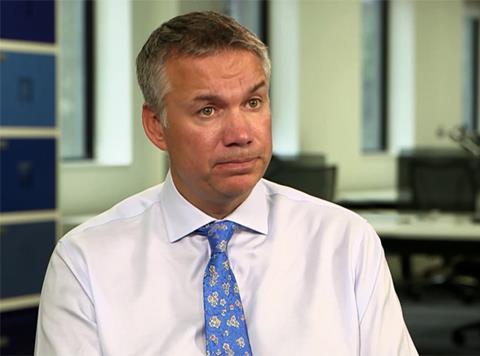 Sutherland has resigned as boss of The Co-operative

Euan Sutherland, CEO of The Co-operative Group, has resigned, with finance director Richard Pennycook stepping up to become interim CEO.

Sutherland, who joined the society in May last year, was reported as having written a resignation letter saying that the group was “ungovernable”, according to the BBC this morning.

At lunchtime today, The Co-op confirmed he had resigned with immediate effect.

In a statement, Sutherland said: “It is with great sadness that I have resigned as chief executive. I have given my all to the business and had hoped to be able to lead its revival. However, I now feel that until the Group adopts professional and commercial governance it will be impossible to implement what my team and I believe are the necessary changes and reforms to renew the Group and give it a relevant and sustainable future.

“I will not accept the retention payments and long-term incentive payments previously agreed for the delivery and protection of value in the Group and the Bank, even though this was successfully delivered.

“I will not accept the retention payments and long-term incentive payments previously agreed for the delivery and protection of value in the Group and the Bank, even though this was successfully delivered”

“I would like to thank all of The Co-op’s hard working colleagues for the support they have given me during my time. I wish them all well. The Co-operative has some wonderful people who deserve a great future.”

Ursula Lidbetter, chair of The Co-operative Group, added: “It is with deep regret that I accept Euan’s resignation. Last year, Euan and his team saved the The Co-operative Bank, without recourse to the taxpayer, and in doing so rescued the Group from the biggest crisis in its 150-year history. They have worked night and day to renew the organisation and to give it a sustainable future.

“Euan’s resignation must now act as a catalyst for the real and necessary change which the Group must go through. I would like to thank Euan for his hard work and leadership and to wish him the very best for the future.”

Sutherland’s departure comes after details of his proposed £3.6m pay and retention packet were leaked to The Observer on Sunday. Sutherland hit back at the leak, saying in a post to the company’s employee Facebook page that it must have come from Board level, and that someone was undermining him.

He joined the society in May 2013, just weeks after the Co-op Bank pulled out of a deal to buy 632 Lloyds Bank branches. However, weeks later a £1.5bn black hole was discovered in the Co-operative Bank. This resulted in months of scrutiny.

Pennycook, previously finance director at Morrisons, joined the mutual in June 2013. He said today: “Our businesses continue to perform in line with the clear commercial plans put in place under Euan’s leadership and I and the team will plot a steady course in the coming months.”

Lidbetter added: “I also like to thank Richard for stepping up to lead the organisation at this critical juncture. We will start the process to appoint a permanent successor and urgently to reform our governance.”