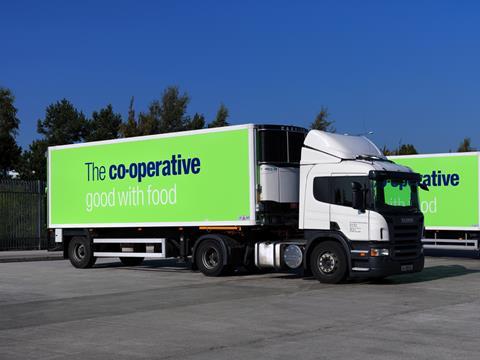 The Co-operative Group is seeking to take its drivers’ dispute to ACAS in a bid to avoid strike action over its outsourcing plans.

The retailer said it was disappointed a national ballot over strike action was now being organised by Unite, the union representing many of its drivers.

Unite said the formal ballot of more than 700 drivers across the country would take place from 1 to 14 March. It followed an initial vote to test the water that had produced a 94% response in support of some form of industrial action.

Drivers will be asked to vote on strike action or other industrial action.

The Co-op Group wrote to 1,000 drivers earlier this month to try to reassure them over its outsourcing plans. Some 129 drivers are affected - 85 at its national distribution centre in Coventry and 44 at the Castlewood depot in Derbyshire.

None of the outsourcing proposals involve deliveries between depots and stores.

“We are disappointed a national ballot is being organised as we have agreed that all Unite drivers will see their terms and conditions protected when they transfer to Eddie Stobart,” said The Co-op’s director of logistics Andy Perry.

“Eddie Stobart has also agreed to recognise Unite as the representative union at our dedicated Co-op site as well as giving clear assurances on other items raised by the trade unions and colleagues through the consultation process. We are working hard to resolve the matter and are seeking to take the dispute to ACAS. We also continue to look at new alternatives to help provide drivers with a choice over their future should they simply not want to transfer and would hope to enter into meaningful discussions on this.”

Unite’s national officer for retail distribution, Adrian Jones, said the formal ballot voted for by its members would decide its next course of action. “Our initial ballot showed 94% of our members wanted to move to a full ballot and that they were prepared to take industrial action.

“Until we have got the result and until we have consulted our shop stewards we won’t be determining what that action might be,” Jones said.

He added that his members wanted to stay employed by the Co-op and did not believe its assurances.

“Our members are just not happy with what the Co-op is doing.”

Unite has 50 members at Coventry while its fellow union, Usdaw, represents staff at Castlewood. Usdaw is still in ongoing talks with The Co-op.

Unite’s move to a formal ballot stems from its fears that the Co-op proposals will lead to future outsourcing beyond Coventry and Castlewood and threaten jobs and working conditions.

It was previously in a lengthy dispute with Eddie Stobart after Tesco transferred 184 of its drivers to the haulier.

It will now ballot Co-op drivers at Birtley in Newcastle; Carrickfergus in Northern Ireland; Castlewood; Coventry; Inverness; Newhouse in Lanarkshire; Plymouth and Thurrock in Essex.

It wants more time to investigate suggestions put forward by shop stewards at Coventry to increase efficiency and reduce costs.

Earlier this month Perry wrote to the drivers to reaffirm there were no plans to outsource other transport or warehouse functions. But he said its current transport model could not overcome the fundamental issue and significant cost of the empty running of vehicles. Savings would allow it to improve its core depot to store operations.

Today Perry repeated his message: “We would like to reassure drivers at our other sites that there are no plans to outsource the areas of secondary transport currently operated in-house or at any of our warehouse operations.

“Our strategy in both the short and long term is to keep these operations in-house.”