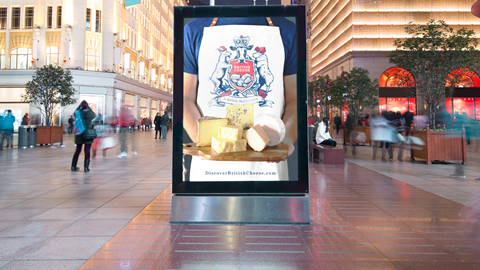 The UK is one of the 10 biggest cheese exporters in the world – but 80% of its cheese goes to the EU. We challenged creative agency Bray Leino to come up with a global export campaign

British cheese exports are booming. They hit a record £665m in 2018, placing the UK within the top 10 biggest exporters of cheese worldwide, according to HMRC data. But trade is dominated by the EU, which currently accounts for over 80% of the UK’s total cheese exports [AHDB].

“In a no-deal scenario, the UK will be faced with WTO tariffs on the products it is exporting to the EU,” says Dairy UK CEO Judith Bryans. “Given that WTO tariffs on dairy products are high, that could make our exports uncompetitive pretty quickly.”

There is hope on the horizon, though. Demand from Asian markets has soared over the past five years, according to HMRC. At the same time, the US, Australia and Canada are emerging as exciting markets for UK cheese.

So for this year’s Dairymen, we asked creative agency Bray Leino to come up with a disruptive export marketing campaign to boost sales for British cheese in markets outside the EU.

Creating a generic export campaign wasn’t easy, says Alex Benyon, a senior copywriter for Bray Leino and one of the leads on the project. “You haven’t just got direct translation issues with the words, but cultural norms and ideas can also get easily mistranslated.”

What’s more, while trade campaigns shouldn’t be boring, they must be diplomatic, he adds. “You have a lot of stakeholders and ultimately are representing your country. So while you don’t want to create boring and anodyne work, you do have to have a sense of diplomacy.”

It’s important, therefore, to “keep it simple and keep to universal topics”, he notes.

“There is a wealth of tradition in British cheese that plays really well abroad,” he says. “Craft, artisan techniques and sought-after small batch cheeses made from old revived recipes are really highly prized.”

In emerging markets like China, British cheese is already considered a luxury, says Donnellan. “A lot of Chinese consumers will study and work abroad and discover ‘real’ cheese for the first time,” he adds. “By real cheese I mean British matured cheeses rather than pizza toppings. They’ll pass this discovery back to friends and family at home – where people will pay a high price for flavour and stronger tasting cheese.”

Food trust is also important in emerging markets, he adds. “In China in particular, this trust has been eroded with a myriad of food scandals over the past few years, particularly in dairy. British imported cheese is considered safe and consumers will therefore pay a premium for those products.”

However, most emerging markets still have a fairly limited knowledge about British cheese, notes Benyon.

“So we also wanted to build on the existing perceptions of Britain around the world,” he adds. “And while things like the Union Jack and London cropped up during our research, the royal family floated to the top as a sign of quality in consumers’ minds.”

Although Britain is one of the few countries globally to still have a monarchy, most have had a royal family in the past, Benyon points out. So perceptions of what royalty means and the quality it represents are universal. “It felt like something really strong to leverage.”

While Britain’s royal heritage is undoubtedly a great leverage for an export campaign, there are very strict rules around marketing when it comes to the royals. The Advertising Standards Agency (ASA) has in the past upheld complaints about advertising that implied royal endorsement – including a press ad for a budget airline that featured a photograph of Prince Charles and the headline “Prince’s secret revealed!” Although the ad did not imply a royal endorsement, permission to use the photograph had not been given, said the ASA.

Marketers are also forbidden from using the royal arms without prior permission unless it has been substantially altered, while references to a royal warrant should be checked with the Royal Warrant Holders’ Association.

So Bray Leino had to tread carefully when designing our British cheese export campaign. “It wouldn’t have been appropriate to just create a royal warrant campaign and stamp the royal family over everything,” says Benyon. “We wanted to give it an air of royalty but in a much more contemporary way.” 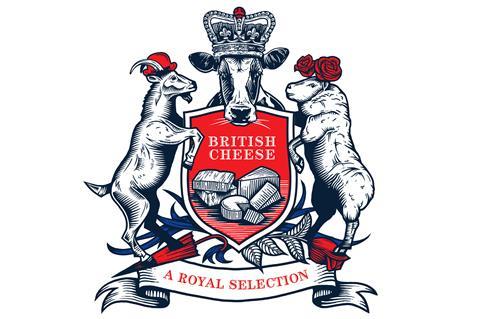 The campaign logo is loosely based on the royal arms, but it has been totally redesigned to give it a cheesy twist. “We took each of the elements of the crest and adapted them to be symbolic of cheese and Britishness,” he adds.

At the centre of the newly designed crest is a cow wearing the crown, while the unicorn and lion have been replaced with a goat and a sheep to encompass all the different sectors of British dairy production.

Other elements, such as a bowler hat, umbrella and roses, are included for a more contemporary take on what it means to be British.

“It nods to authenticity and craft but it is also regal, impressive and majestic,” says Benyon. “To give it a bit of life we ran the red, white and blue colours through it, which reinforce the Britishness and give it a more striking look and feel.”

Once the key branding was done, the team at Bray Leino realised they needed to “bring some real cheese into the campaign”, says Donnellan.

So the key poster for the campaign features a man wearing an apron with the crest on it, and holding a cheeseboard packed with a variety of British cheeses.

On the website, meanwhile, “you can roll over the nice illustrations and it will show pictures of the real cheese”, says Benyon. “It felt important to be able to feature real cheese in there.”

When deciding which cheese to represent in the campaign, Bray Leino looked at British cheese export figures. “Cheddar is by far the biggest of our exports but we wanted to make sure we had goat’s and sheep’s cheese in there,” says Benyon.

“The other part is the territorials like Wensleydale and Red Leicester, which are a really small part of exports, so felt like a good thing to focus on because there is a real opportunity for growth.”

In order to help consumers in emerging markets explore British cheese, the campaign would also set up a dedicated website at www.discoverbritishcheese.com. Simple in design, it would offer a wealth of information, including food pairings and recipes, says Benyon. “It would take visitors on the journey and show you all the things you could do with British cheese.”

While keeping it simple is a great mantra for trade campaigns, things get a bit more complicated when it comes to planning social media activity. “Social media campaigns really have to be tailored to different markets, otherwise they come across as clunky,” says Benyon. “You need to work out individual ways to target each market.”

That’s especially true in China, where the biggest players in social media – Facebook and Instagram – are banned. “WeChat is currently the biggest social network in China,” says Benyon.

So for our British cheese export campaign, Bray Leino has developed a social media campaign that could use the WeChat platform and is based on a Chinese tradition: hong bao, or ‘red envelope’. 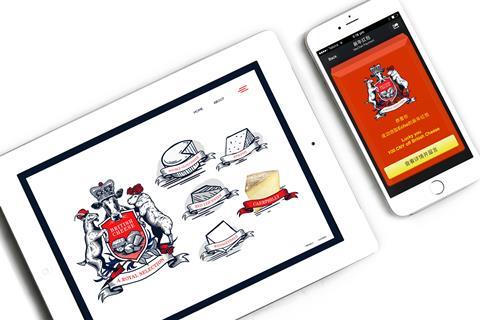 This tradition sees people give friends and family money in red envelopes during special occasions such as weddings and the Chinese New Year.

The red colour of the envelope symbolises good luck and is a symbol to ward off evil spirits.

With the dawn of mobile payments, it’s recently become a “really big thing for people to digitally send out their hong bao”, says Benyon. “And the big social networks are at war in China trying to get people to sign up to these things.”

WeChat, a Chinese messaging, social media and mobile payment app, has established itself as the leader when it comes to the digital exchange of ‘lucky money’. According to Tencent, which created the app, more than 768 million people exchanged red envelopes through WeChat during last year’s Spring Festival, up 10% from the previous year.

And brands are increasingly finding ways to capitalise on the trend. Starbucks, for example, enabled users to send cups of coffee in the form of digital red envelopes to friends through the WeChat app.

So in China, the social media campaign for British cheese exports would offer people the opportunity to send a friend or family member a red envelope containing a voucher offering money off some quality British cheese.

“You would receive the red envelope from a retailer, but it would be digitally closed to you,” Benyon explains. “To open it there would be some sort of interaction, such as shaking, to give you a sense of engagement and playfulness. Then your mystery amount of discount on some British cheese would be revealed.” 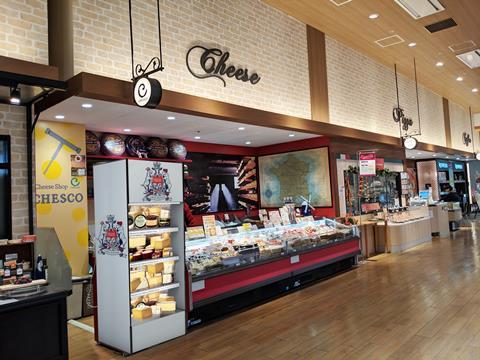 The use of the hong bao tradition would ensure the social media campaign for British cheese is perfectly tailored to the Chinese market, believes Benyon. “We are starting to see more brands playing in that space, so this felt like a really nice way to bring our culture into theirs and show a bit of understanding in that area.”

If you really want to sell British cheese in new emerging markets, however, you need to find ways to get it onto supermarket shelves. And that’s not always easy. “Chilled space is limited in any market, particularly where dairy penetration is so low,” Benyon notes. In-store activation would therefore be a key part of the campaign, with branded standalone chillers placed in stores of targeted retailers to show shoppers exactly what Britain has to offer.

“We thought there was a good opportunity for a trade campaign to go in and supply its own kit, essentially creating a chilled free-standing display unit,” says Benyon. “This would be a really good way for British cheese to carve itself out, control the space, set itself apart as the premium cheese.”

By harnessing the universal appeal of Britain’s royal heritage, offering a flavour of individuality for each emerging market and carving out a branded space in stores, our export campaign would open the world’s eyes to the wonderful variety and quality of British cheese. And that, as they say, would be a right royal result.