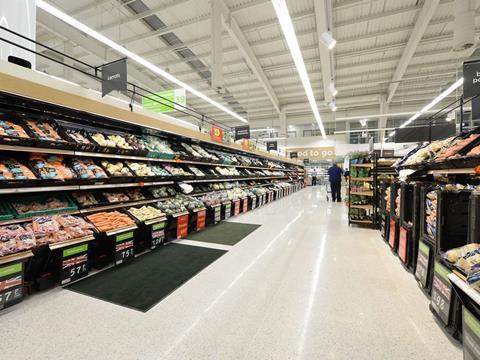 It was a close run, but Asda maintained its recent dominance this week to pick up its fifth consecutive Grocer 33 pricing victory.

Asda’s £68.62 total shaded runner-up Morrisons by just 25p. The Walmart-owned retailer offered the lowest price for 24 lines with 11 exclusively cheapest. These included the Braeburn apples, the organic cauliflower and garlic as well as the Old El Paso fajita kit and Soreen malt loaf.

At £68.87 Morrisons was second, helped by 10 promotions of which nine were money-off, resulting in its basket being £2.56 cheaper than last month and 55p cheaper than last year. It had the most offers this week too: Asda and Tesco both had seven, and Sainsbury’s and Waitrose five each.

Morrisons offered the lowest price for 16 products and was ­exclusively cheapest for the fish fingers, Rice Krispies Squares and Tresemmé shampoo.

Third-placed Sainsbury’s was also competitive this week. At £69.67 it was just £1.05 dearer than Asda with a basket £1.30 cheaper year on year, and cheapest on 11 lines - though only exclusively so for the own-label rump steak.

Tesco offered the lowest price for 10 lines and was exclusively cheapest for the German salami. However it came in £9.02 more expensive than Asda at £77.64.

Of its seven promotions, five were multibuy deals. More ­significantly, six of the products on our list came off promotion this week, making the total cost of our shopping list £6.45 (9.1%) more expensive at Tesco than a month ago. It was only 0.4% more expensive year on year.

Fifth placed Waitrose was even further off the pace. At £82.22 it was £13.60 more expensive than Asda. Waitrose only had the lowest price for three products and was exclusive for just one line - the Boursin cheese.