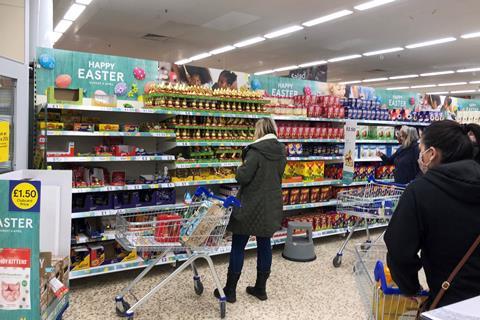 Tesco has picked up its second store of the week award in three weeks thanks to excellent customer service, strong availability and solid store standards at its County Lane, Bracknell branch.

Our mystery shopper visited on a busy Sunday afternoon and though there was a short queue to enter the store, it was managed efficiently thanks to a traffic light system. There was also a marshal on hand offering hand sanitiser.

Once inside, our shopper was impressed by the “well-ordered and tempting” seasonal Easter egg displays.

The store had wide aisles and, while there was restocking in progress, the trolleys did not cause any obstructions.

Most products were generally easy to find but staff were on hand to help our shopper, who received excellent assistance on two occasions.

She would have picked up a full basket but for the Carte D’Or ice cream being out of stock.

Morrisons Cwmbran came a close second this week, just two points behind Tesco. Our shopper got a great first impression due to the well-maintained carpark, trolley sanitising station with clear instructions and an outdoor laundrette situated near the entrance.

Once inside, there were a few gaps dotted around the store with plenty of restocking in progress, though some trolleys with empty cardboard packaging had been left unattended.

Our shopper found the store generally easy to navigate but she did need to call in staff for assistance on a number of occasions. These interactions ranged from the excellent, with one knowledgeable member of the team really selling an alternative option to the product she couldn’t find, to another simply admitting “I don’t have a clue” as to whether the store had any beetroot salad.

Overall availability was strong, with just one out-of-stock and one not-stocked line.

Availability was more of a challenge for Waitrose in Reading, which took third spot. Our shopper picked up 30 products, with two out of stock and one not stocked.

There were a few empty shelves overall and also our shopper spotted plenty of restocking in progress, but this did not cause any obstructions.

Staff were “very helpful and polite” – in particular the checkout operator who, after our shopper noticed a bad spot on the aubergine, quickly called her manager and replaced it with another.

There was a big gap between Waitrose and fourth-placed Sainsbury’s, whose Sutton store had six products out of stock as well as one not-stocked item.

Our shopper’s encounters with staff were mixed, with one very helpful team member taking her to the missing yoghurt while two others simply pointed to where she needed to go.

In last place was Asda Park Royal. Our shopper’s visit started with a five-minute search for a parking space and didn’t get much better. On entering the store she described the hand sanitiser station as messy, while the Easter promotional displays made the entrance seem packed and cluttered. This continued throughout the store, which our shopper described as “claustrophobic”.

Availability was poor, with seven out-of-stock items, and staff failed to cover themselves in glory. None of the staff our shopper asked for help took her to the required item, some told her items would be on one of two aisles, while another directed her to aisle 19 for the free-from fusilli, which she then found herself on aisle 20. This all added up to just 36 points.