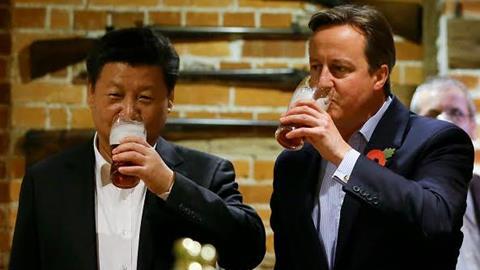 It’s five years since George Osborne predicted “a golden decade” for Sino-British relations, a vision upon which the death knells are now rung.

In the past two weeks, the UK has suspended its Hong Kong extradition treaty and confirmed Huawei will be banned from its 5G network, risking a wider confrontation with China that could easily drag unsuspecting British businesses into the mix.

On The Andrew Marr Show yesterday, Liu Xiaoming, China’s ambassador to the UK, warned of a “resolute response” to any sanctions imposed on any Beijing officials. Last week he said Britain would “have to bear the consequences” if it treated China “as an enemy”.

It is not hard to imagine what China’s “resolute response” might be. In May, Beijing slapped an 80% tariff on Australian barley as punishment for demanding an independent coronavirus inquiry, leading the country’s grain industry to warn new tariffs could push prices to prohibitive levels for shipment.

Although this is high-level geopolitics in which food and drink businesses are innocent bystanders, do not expect them to be immune from the effects. Far from it.

Both China’s actions against Australia and the ongoing US tariff war against the EU has proven it is not just the guilty who are hit in modern-day trade wars. Washington is punishing Brussels for its illegal subsidies to Airbus, yet it is scotch whisky distillers, cheddar cheese producers, and perhaps soon gin makers, who are paying the price.

Businesses may argue this is grossly unfair, but if the rules-based system governing trade continues to be eroded, major powers such as China and the US will become increasingly free to act as they please. This will be particularly bad news for the UK as it exits one of the world’s largest global powers, becoming a medium power just as the system designed to support medium powers dissolves.

For businesses who have come to rely on exports over the years, any imposition of tariffs by Beijing will sting. China is now the eighth-largest export market for UK food and drink, with Chinese consumers buying more than £780m worth of British products last year [HMRC].

Exports have grown considerably over the past few years as a result of significant hard work by numerous different parties. AHDB, for one, has been at the heart of things, working to ensure the UK is well-placed to meet China’s insatiable demand for meat as a result of African swine fever plaguing the country’s pork herds. It also worked with Defra to appoint an agriculture & food counsellor in 2015. Since then, UK exports have almost tripled.

While the government did not prioritise China in its initial list of targets for post-Brexit trade deals, China is a key strand of its Global Britain strategy, an opportunity to build closer trade ties with the world’s fastest-growing major economy.

But with Beijing becoming ever more assertive on international affairs, the UK, like many nations, is having to reassess its relationship. The stand taken against “egregious” human rights violations, as Dominic Raab put it yesterday, may be welcomed by many, but from a business perspective, it is quickly becoming another threat to worry about.