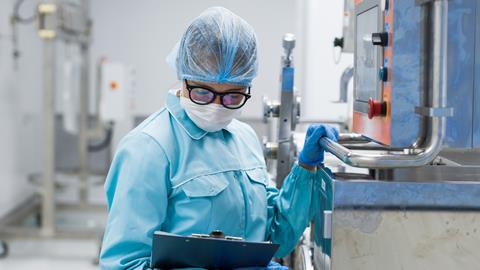 Absenteeism panic is over, but now food producers face a PPE problem

As the nation waits nervously for positive proof the coronavirus outbreak is past its deadly peak, there does at least appear to be some good news emerging – that the food and drink industry has avoided what some feared would be its doomsday scenario.

More so even than panic buying, companies had warned that if absenteeism rates started getting anywhere near 25%, factories and food stores would be forced to close.

As it is, while there have been limited closures of stores, mainly in areas that have become ghost towns because of lockdown, and while dozens of factories have shut down since the outbreak began, absenteeism figures have not reached those dreaded levels. Whisper it, they appear to be past their peak.

Latest stats from the FDF show almost 60% of its members reporte absentee rates of less than one in 10 staff, while just 2% of companies had rates above 20%.

Retail sources say absenteeism also appears to have peaked at 20% – a huge disruption, but not a fatal one, especially given the enormous recruitment drive by supermarkets, which saw Tesco alone bring in 30,000 new workers.

The BRC says the latest figure is 12%.

However, despite the good news on staff absence, there are still threats to retaining this workforce stability.

Not least among these is the issue of personal protective equipment, and specifically advice on mass wearing of masks, which has been an elephant in the room for weeks in the industry and is making companies extremely edgy about a new workforce threat.

Boffins from the Scientific Advisory Group for Emergencies (SAGE) group met yesterday to consider the latest evidence. It’s widely believed that while experts don’t think masks will prevent the disease, they might help stop its spread.

So, despite official advice from PHE only two weeks ago saying masks were not necessary in food factories, the prospect of an about-turn has led to dire warnings about the impact on the production line.

Suppliers have told The Grocer their factories could be left “paralysed within days” if ministers “press the button” on masks and follow the likes of Austria and Germany, which are making the wearing of masks a key part of their lockdown exit strategy.

Masks are already used in large scale by manufacturers whose products contain fine powder ingredients, including seasonings, flavourings, cocoa and flour. Suppliers of these products told The Grocer they feared a 20-fold increase in demand, just in food factories, if masks were recommended for all workers and the public.

All this comes as The Grocer today revealed the Health & Safety Executive is already urging food companies to ration the use of PPE, including masks, to “those workers who need it”, with shortages of suppliers due to Covid-19 already biting.

Its new advice, published in an open letter to food companies, includes setting out ways in which companies can use lower-spec masks when workers are dealing with products such as flour on production lines, in order to preserve supplies.

It’s no wonder, with such mixed messages coming out, that the government is trying to reassure food companies (as well as NHS chiefs) that it won’t act rashly on masks, if it means an even worse national shortage.

But it’s difficult, if not impossible, for the government to stage-manage this message. If the public knows they are going to be recommended masks, what will they do?

It doesn’t take a Sage scientist to work that one out. The industry will be hoping the impact on food factories, like the feared absence rates, turns out not to be as bad as some predict.