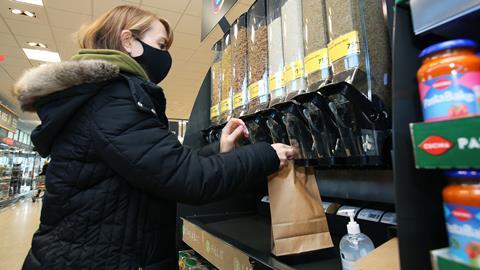 No more is packaging-free grocery shopping the exclusive preserve of customers who can afford to shop at Waitrose Unpacked.

This week saw Aldi launch a similar trial, albeit on a much smaller scale. A store in Ulverston, Cumbria, has gained a bank of dispensers where customers can fill up on basmati rice, brown rice, penne pasta and wholewheat fusilli.

To be fair, it already wasn’t the exclusive preserve of Waitrose shoppers. Asda has its ‘sustainability store’, which opened last year, and M&S also has refill aisles in at least three stores. But Aldi’s is the first such move by a discounter (unless you count Iceland’s very early days selling loose frozen food).

Aldi’s Worldwide Basmati Rice is currently listed at £1.29 per kg packaged on its website, while the price from the dispenser is £1.19 per kg. Cucina Penne Pasta, Cucina Wholewheat Fusilli and Worldwide Brown Rice are all 75p per kg from the dispenser. Packaged, the first two are 78p per kg and the last 79p.

For some reason Aldi didn’t include this detail in its announcement, but it will be an important tool in persuading its price-savvy customers to make use of the new dispensers. The extortionate premium charged for loose products in some convenience stores would get short shrift here.

With its wafer-thin margins, we must wonder how a discounter can afford to trim roughly 4%-5% off prices (closer to 8% in the case of the basmati rice) while adding a new complexity to a business model based on simplicity. Perhaps Aldi itself is not sure how scalable the trial is in its current form, and that is why it is not shouting any price promises.

But probably the most noteworthy feature of Aldi’s packaging-free trial is that it is not, on close inspection, truly packaging-free. The clue lies in the very unambiguous instructions on the bank of dispensers, which point to the first step: “Take a bag.”

Granted, it’s not a plastic bag. It’s one of the recyclable, FSC-certified paper bags, which are provided free of charge. But really, it’s just a move from the usual plastic packaging to paper. Aldi says as much in its statement. “Customers at our Ulverston store can now buy the same high-quality items they know and love, while also cutting down on plastic packaging,” says Aldi plastics and packaging director Richard Gorman.

Use of one of the paper bags is necessary for the purchase to be correctly processed at checkout, unlike other retailers’ trials which allow customers to fill their own containers.

Aldi should of course be applauded for taking its first tentative steps into dispensing products loose, and it should be remembered that it is a trial, which by definition is likely to evolve and is being closely monitored.

But it raises the old, inconvenient question of whether paper is actually better than plastic for the environment. So out of favour is plastic that consumers may assume it is the greater evil, but available evidence remains inconclusive.

Some historic reports, such as a decade-old one from the Northern Ireland Assembly, have suggested that paper has a higher overall carbon footprint because it is heavier in transit and uses more energy in production. But dated studies tend not to focus on quite the right question, concerning themselves, for example, with single-use plastic carrier bags, which supermarkets stopped providing in 2018.

The issue is also notoriously complicated, hinging on factors including the proportion of recycled content in both the plastic and paper bags, the number of times they are used and how each is disposed of.

That’s perhaps why Morrisons has been somewhat cagey about the rationale behind its plans to replace plastic bags-for-life with paper ones across its whole estate. A life-cycle assessment by the University of Sheffield had found its paper bags indeed had a lower carbon footprint than the plastic ones being replaced, it said. But the supermarket has since refused to release the study, calling it “commercially sensitive”, and reducing its ‘evidence’ to a claim.

Paper may well be less harmful for the environment, but the industry should carefully examine the question before leaping. And any leaps should be made in a transparent way that fully discloses the impact. Although the public may see any move away from plastic as a postive, it’s up to the industry to take a more nuanced view that takes into account the full picture.