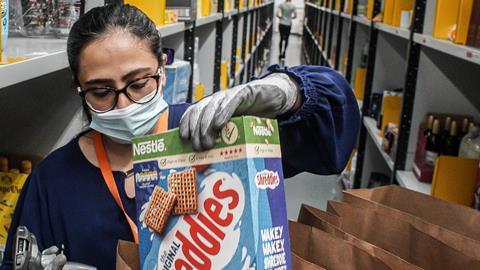 Amazon’s announcement that grocery delivery will be free for Prime members from today will come as a sucker punch to supermarket bosses struggling to make online operations profitable.

Margins have been worn down significantly by the huge growth in online grocery seen over the pandemic. Just how damaging to the bottom line depends on how orders are fulfilled.

Those doing their own picking from physical stores are typically suffering a negative operating margin of about –15% according to a major analysis of global grocers by Bain & Company. The damage is less when the grocer picks from a warehouse (at about –8%) or when a third party like Deliveroo does the picking (–5%). Even when a delivery fee is added, the costs still aren’t covered.

The highly automated CFC model – adopted by the likes of Ocado and Amazon – still negatively affects margin. But it’s the only model that a delivery charge can cover the cost of, Bain says.

It’s a tricky spot for the majors. Don’t expand online and they risk not being competitive in the new normal. Raise fees to cover costs and face a consumer backlash – which is exactly what happened to Tesco last week when it introduced a “fairer”, and for many shoppers higher, pricing structure for deliveries.

By making grocery deliveries free to its estimated 15 million Prime members (Mintel), Amazon has made the rock even rockier and the hard place even harder for the mults – and Ocado too.

“It is not sustainable to continue to subsidise the costs of picking and delivery. If Amazon takes market share from the big four, this will impact their ability to get economies of scale and address the profitability challenges they have,” he adds.

Will it work? It might not be all doom and gloom for its rival online grocery players. Amazon Fresh to date has had limited impact – GlobalData data shows only around 5% of Brits have ever bought food from Amazon, and typically those have been ambient goods from the main Amazon.com channel. Brereton believes Amazon has a lot of convincing to do for customers to see it as a place to buy food, as well as everything else. Skelly predicts “limited impact”.

Meanwhile, many Prime members will have already chosen an online grocery provider and set up regular orders and won’t be bothered enough to switch. Amazon Fresh’s range is also towards the premium end. With many purse strings tightening, the pricey artisanal offerings may have limited appeal.

Of course, the doubts about its runaway success could be wishful thinking. As Brereton puts it: “After all, Amazon is Amazon.”