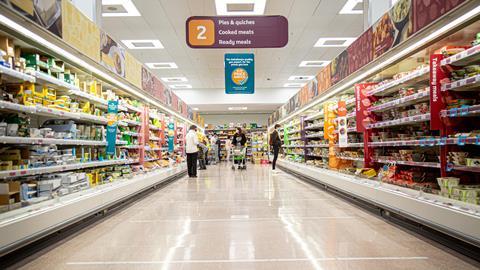 Apollo’s bid for Sainsbury’s may be speculation, but UK grocers remain attractive investments

So much for the usual slow trickle of hard news during the ‘silly season’ of summer. Fresh off the heels of a £7bn Sir Terry Leahy-backed offer from CD&R for Morrisons on Friday, speculation is now swirling around the future of Sainsbury’s.

A story in The Sunday Times hinting that buyout giant Apollo Global Management is lining up a bid for Sainsbury’s sent investors into a buying frenzy today. Shares soared 15.3% higher to 339.8p – approaching highs not seen since February 2014.

But while the market has certainly reacted wildly, there seems to be little in the way of substance to the report just yet.

Despite an eye-catching headline and intro that claimed “private equity giants are circling Sainsbury’s with a view to possibly launching bids of more than £7bn”, there aren’t any hard facts to cling onto in the body of the story. It turns out any interest from Apollo in Sainsbury’s is “understood to be exploratory”.

Even The ST’s sister paper, The Times, appeared to pour cold water on the news today, reporting sources insist Apollo is not looking at Sainsbury’s, hasn’t appointed advisors and has not held talks with the supermarket. On top of that, Apollo’s possible involvement with the Fortress consortium’s attempt to beat CD&R to the Morrisons prize would also rule it out of a tilt at Sainsbury’s.

And the fact Sainsbury’s hasn’t even bothered to release a comment to the London Stock Exchange tells its own story.

Shore Capital analyst Clive Black was withering in his assessment of the speculation in a note to the broker’s client this morning. He called the story “sensationalist” and “shallow” while also pointing out the paper effectively rehashed what has been a widely rumoured since Apollo lost out to TDR and the Issa brothers in the race for Asda last year.

However, there is no smoke without fire, and it’s not to say The Sunday Times is wrong.

Even if Apollo doesn’t end up tabling a bid for Sainsbury’s, there is a long line of other potential suitors – from Lone Star, CVC Partners, Blackstone and KKR to Fortress and other consortia of investors – with mountains of dry powder and supermarket assets on the shopping list.

Today’s share price rise at Sainsbury’s highlights the market is now alive to the fact that even the very biggest businesses are in play – including Tesco, with its market cap scraping against the £20bn mark. Indeed, Tesco was carried higher today as well, with shares up by more than 2% to 252.3p.

Shore Cap’s Black doubled down on his prediction there will be no listed UK supermarkets in due course.

So what’s behind this sudden influx of interest in a sector much underappreciated by both the stock market and private investors?

Massive captive demand throughout the Covid pandemic has driven ever-higher numbers through the tills of all the grocers, as well as dramatically changing consumer habits and finally transforming the costly online model into a money maker.

It also helps Aldi and Lidl have lost a little of their potency as the discounter market starts to mature.

And then there is the lucrative potential tied up in the large property estates just waiting to be unlocked by crafty leveraged buyout merchants.

Not to mention the long-overlooked fact these businesses are reliable cash cows throwing off millions of pounds every year.

Andrew Porteous of HSBC estimates Morrisons has £400m of free cashflow annually, while Sainsbury’s and Tesco should be aiming towards £500m and £2bn respectively.

A recent analysis by The Grocer, taking a deep dive into a report by cashflow analytics specialist Quest on which UK stocks are vulnerable to takeovers, found Sainsbury’s to be the most attractive name in food retail. The division of Canaccord Genuity argues stocks with a leveraged buyout free cash yield higher than 10% are attractive to a PE buyer. Sainsbury’s sits on 15.3%. Although this would come down with any bid made at a premium to the share price.

The stock is 86% higher than where it sat pre-pandemic, given a boost by Czech billionaire Daniel Kretinsky building up a sizeable position. Kretinsky and the Qatar Investment Authority, which is the biggest Sainsbury’s backer, have a combined shareholding of about 25%, making them kingmakers in any potential deal.

That in itself raises difficulties for any potential buyer, with shareholders and the board likely to expect any bids to come with a fat premium attached. CD&R’s £7bn offer for Morrisons represents a 60% mark-up on the share price back in June before the bidding war started.

Any premium of 60% to the currently inflated share price at Sainsbury’s is improbable, but even when applied to June’s levels of around 250p it gives a rather full number of somewhere close to 400p per share, and a valuation touching £9bn.

It’s not the only hurdle.

Sainsbury’s freehold portfolio is way below that of Morrisons and Asda, although still an attractive 50% to 60% of stores.

And Argos complicates matters, given an ongoing expensive integration programme whose fruits are hard to properly identify yet in the group performance. It also means Sainsbury’s is out of reach of strategic buyers such as Amazon given the obvious competition issues.

There are also questions worth asking about whether another of Britain’s biggest supermarkets falling into the hands of an overseas buyout firm represents any risk to the country’s food security.

Despite all the challenges, Sainsbury’s is strategically better positioned than Morrisons and Asda, with a stronger convenience presence, stores weighted to more affluent areas of the UK, a fast-growing online business and a formidable non-food offering.

And as Clive Black notes, whether The Sunday Times story proves to be on the money or wide of the mark, the guns of the world’s biggest asset managers will remain trained on UK grocers for the foreseeable future.

“If Apollo does not participate in Morrisons’ future, then we cannot discount that the private equity group nor other mega-finance houses will consider looking at Sainsbury’s,” he says.