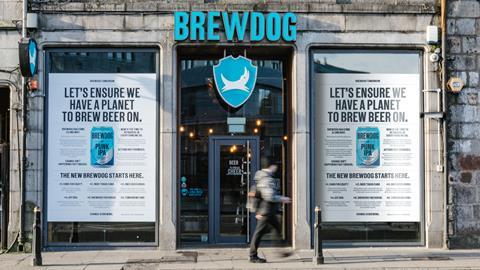 As BrewDog delays its IPO, should it consider abandoning flotation altogether?

BrewDog has been seemingly unstoppable, even in the face of turbulent times. But even the cult beer brand couldn’t escape unscathed from the pandemic, it seems.

Founder James Watt has reportedly pushed back plans to float for what could be another one or two years, after advisers and banks advised an IPO should be delayed because Covid has made the hospitality industry too unpredictable. “Could it be sometime in 2022? Maybe. 23? Maybe,” he told The Telegraph this week.

But could the decision to delay the IPO go deeper?

BrewDog is an ingenious brand. With great product. And its marketing, though often controversial, eyebrow-raising or just downright annoying, is secretly the envy of many in the industry. It is no stretch to say that it has almost single-handedly changed the UK beer market.

It is still much-loved by consumers, too. Punk IPA is, after all, the UK’s third biggest ale brand, while its Hazy Jane beer is fast rising steadily up the ranks. Surely that would be an attractive prospect for investors.

But everything that makes BrewDog a powerful, innovative brand, let alone that lets it get away with its various controversies, is, frankly, anathema to what makes a successful public company.

A public company the size of BrewDog would likely not have got away as lightly as it did with the culture of fear allegations without serious pressure from institutional investors. Who knows what that debacle could have done to its share price?

Were BrewDog public when that happened, a substantial ‘blood sacrifice’ would likely have been forced. Instead, Watt has responded to the allegations with policy changes such as the introduction of exit interviews and an employee representative group, an independent review of its culture, and, as the Telegraph article reveals, updating its employee handbook to reflect its “high performance culture”.

Going public also requires people with bona-fide corporate plc experience. BrewDog has recruited a number of these people from the likes of Red Bull, Lucozade Ribena Suntory (now called Suntory Beverage & Food) and Just Eat over recent years, but many of them have left within months of joining. Investors might view this as a red flag.

But it is by no means impossible. For all its eccentricities and issues, at its core BrewDog is very good at making, selling and, crucially, marketing beer. Its enduring ability to turn heads and generate headlines is undeniable.

So much so that it raises the question whether BrewDog should float in the first place. Arguably, subjecting BrewDog to the rigorous checks, balances, standards and scrutiny of being a plc could force it to do things slower, take things more carefully and avoid winding people up in pursuit of stability and access to capital – neutering the brand. There are, after all, other ways to grow without going public.

The problem, of course, is that BrewDog has been using the promise of an IPO to appeal to investors since the latter half of the past decade. Whether that’s its legion of ‘Equity Punks’ or TSG Consumer Partners, the American firm that owns a 22% stake in it.

Hence Watt will no doubt be wondering just how long they will be willing to wait for the glorious exit. Private equity firms are not known for extreme patience. Keeping investors happy while trying to find a solution for the business that does not compromise everything that made it a success in the first place is no minor balancing act.

Still, if two blokes can turn a DIY garage brewery into one of the UK’s most valuable fmcg brands in under a decade, it’s not unreasonable to think they might be able to pull this off, too.