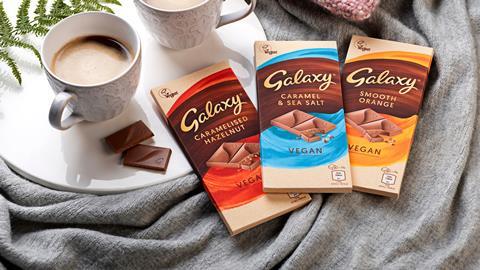 As sales rocket, what next for free-from food and drink?

It’s strange to remember that when free-from food first started to filter into mainstream consciousness, it was sneered at. These fancy pants, neurotic gym bunnies think they’re too good for old-fashioned bread, naysayers squealed.

But over the past year the free-from category – that’s everything from pioneering meat alternatives á la Meatless Farm to staples like wheatless pasta, and unabashedly trendy oat milks – grew by £385.2m [Kantar 52 w/e 22 March 2020].

And that was before lockdown. Over the 12 weeks to 14 May, free-from added another £123m [Kantar]. The message is clear: Brits can’t get enough of the stuff.

Meanwhile, the number of free-from product ranges is expanding faster than you can utter the words ‘xanthan gum’, with launches from an ever-growing roster of big brands (such as Gü and Galaxy) hitting shelves.

Which raises the question: do we even need a dedicated free-from aisle any more? Given the wild popularity and now, proliferation, of these products, wouldn’t it make sense to range them alongside their mainstream counterparts? Why not stick vegan Galaxy in with the rest of the confectionery?

Some suppliers, like Fiid’s Shane Ryan, think this the best course of action. With an increasing number of Brits picking free-from options for their supposed health benefits rather than any dietary requirement, it makes sense to handle free-from like another ‘tier’ in ranges, he suggests.

“What needs to happen is a distinction,” he says. “The category itself may fall into a number of different subcategories” (such as free-from health and free-from junk), which at the moment are “all bunched in together”.

More beneficial to retailers, arguably, would be a broader health-focused aisle, curating products from a broader range of suppliers.

Others are staunchly against this because of how severe allergic reactions can be among those with dietary requirements. Picking up the wrong SKU for a small percentage of shoppers could, after all, do them serious harm.

Free-from is also still expensive thanks to the extra costs of ensuring product integrity. You can’t change the price of a £3 bag of crisps just because it looks out of place next to the its 79p cousin. Why highlight an already obvious price premium and kiss goodbye to your rate of sale?

There are also questions as to whether brands could be doing a better job when it comes to free-from innovation. Despite surging sales, overall shopper satisfaction with the category is significantly lower than average, according to figures from Shopper Intelligence, which also found shoppers were much more likely to ditch the category altogether if they couldn’t find what they wanted.

After all, health-focused Brits might currently be buying up gluten-free bread like there’s no tomorrow, but we’re a notoriously fickle bunch. Remember when ‘dirty’ street food was all the rage? Nah, us neither. Shoppers need to be kept interested.

The good news is the category doesn’t have to answer these questions urgently. For the moment, retailers seem content simply to up the floor space given to free-from across their estates. But growing up means making difficult choices, and the free-from category may soon have to make some of its own.