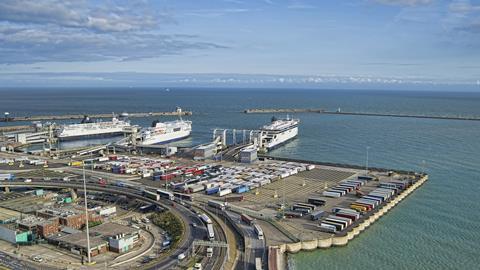 Chaos at the border bodes far from well for Brexit

Britain’s border with France may have now reopened, but the disruption that will have struck the nation’s food supplies this week has only just begun.

For a start, measures brought in this morning to fix the crisis are, to say the very least, not running smoothly. The army is being deployed to help carry out quick-turnaround lateral flow tests in a vast logistical operation at Manston Airport, where 4,000 lorries have been waiting, and at other sites. Ministers admit it could take several days to clear the backlog.

The transport department has told logistics sources they hope to carry out 300 tests per hour. According to drivers trapped at Dover, getting one of them is proving a logistical challenge in itself. “The people from Manston told me I must go to Margate [to get a test] and the people from Margate told me I must go back to Manston again,” one haulier told Radio 4 this morning.

Even after the backlog is cleared, there is the question of who will want to return. Before the latest crisis, many hauliers were already refusing to enter the UK, and persuading them to do so after Christmas could be a job worthy of Protagoras: “Happy new year all. We know your last job here wasn’t the best…what with the delays, home-dug toilet holes, dinners consisting of just a cereal bar, scuffles with police. But we’re now running low on food. Do you mind running the gauntlet again? Please?”

The encouragement will inevitably need to come in the form of enhanced financial incentives for drivers, but with the price of some lorry routes already reported to have tripled even before the borders closed, it could all start to get rather hair raising, rather quickly.

This is all, of this, of course, before we even get on to the small matter of Brexit. Some in the industry are increasingly concerned the current mess could be a dry run for the real thing next year. “This kind of chaos, and this kind of delay, could easily be a presaging of what is to come,” FDF CEO Ian Wright told Bloomberg Television on Tuesday. “It’s lifting the curtain a little on the chaos that could happen if it all goes horribly wrong.”

Although the worst of the Brexit-induced trouble is unlikely to start immediately, with many producers on both sides of the Channel already planning to opt out of sending goods for at least the first few weeks of the year, this in itself has two major problems for the food supply chain.

The first is supply itself, with the UK’s food resilience for January already moth-eaten by the enforced need of many businesses to tuck into their Brexit stockpiles this week. Secondly, haulage prices will rise even further if a driver is having to leave the UK without a load, placing the burden on British importers to pay both legs of the journey.

2020 is to end with food rotting on the side of the M20, the imminent threat of shortages, growing concern about the possibility of a second wave of panic buying, and the army called in at the ports. With the UK’s very first act of 2021 to be exiting the EU, it is precisely the set of circumstances we could have done without.

This is the last newsletter from The Grocer team before we head off for a festive break. We’ll be back on 4 January 2020 with the latest coverage on Brexit, Covid-19 and everything else concerning the grocery sector. In the meantime, you can catch up on our extensive Brexit analysis and insight, including what UK tariff policy could mean for food prices and which foods would face price hikes in a no-deal, plus our insight into what foods could be affected by current border delays.