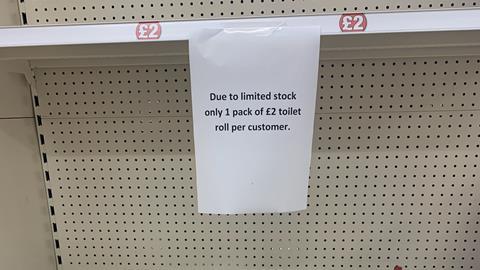 Coronavirus will change our lives. Retailers are already adapting to a new normal

It’s not just the millions of over-70s facing the prospect of self-isolation who will find themselves having to adjust to a new reality in the weeks and months to come.

The coronavirus crisis is threatening to cause such fundamental change to people’s lives that the prime minister has had to announce daily broadcasts to give us the latest updates. If Boris Johnson did fancy himself a modern-day Winston Churchill, now is his time to start walking the walk.

As his government prepares to publish new emergency powers tomorrow – which could lead to school closures, restaurants and bars being shuttered and police patrolling the streets looking for coronavirus victims and rogue pensioners – one of those areas under threat is the supply of food we get from our supermarkets. And supermarkets have been forced to take emergency measures of their own.

Anyone who had the misfortune to witness the extraordinary scenes across the UK over the weekend will realise we are living in uncharted and frightening times. Food products like fresh meat, pasta, eggs, milk, baked beans, tinned tomatoes and rice were stripped from the shelves, as consumers turned a deaf ear to pleas for calm from supermarket bosses.

As The Grocer revealed today, the weekend panic led to the biggest volume sales in history – the equivalent of Christmas coming over two days – but this is one Christmas retailers will not be celebrating, despite cynics who accuse retailers of rubbing their hands at all this extra business.

Neither was it much fun for the staff, who are reporting in some instances being too scared to return to work because of the climate in stores.

It was truly shocking how quickly the stockpiling of hand sanitiser and gels, painkillers and now-infamous toilet roll became a much more widespread run on everyday food – and this wasn’t happening in isolated pockets, it was happening up and down the country.

Clearly the message, including the prominent national newspaper appeals from the leading supermarkets yesterday and again today, that stockpiling is unnecessary and irresponsible, has not got through. Whether this madness continues in the days and weeks to come will depend on how quickly people adapt to the new norm, and realise their behaviour has to change – or fear of food shortages will become a self-fulfilling prophecy.

Already, as we report today, most of the major mults are planning to follow Aldi’s lead in introducing a four-product limit across all SKUs.

But as supermarkets and their suppliers work around the clock to replenish those stripped aisles, the brutal fact is that this could just be the tip of the iceberg as the outbreak takes its seemingly inevitable course.

Whilst panic buying has posed major questions over the resilience of the food chain, what many predict will be the bigger hit to the industry is waiting in the wings: potentially thousands of industry workers, or their families, falling ill.

Behind the scenes, supermarkets and the entire chains that supply them are having crisis talks about how to cope when up to 20% of the workforce could be away from work. It is impossible to see any outcome other than this having a major impact on suppliers.

Even more than we’ve seen so far, this is going to mean communities having to get used to new ways of living and shopping.

Already we have seen a string of supermarket CEOs inform customers about new procedures for online deliveries, with delivery drivers in the front line of food supplies. But it is clear online deliveries don’t have the capacity to be the answer.

Instead, we are going to have to see an unprecedented suspension of competition laws which will surely have to come in across the sector.

Over the weekend there was the seismic revelation that supermarkets were discussing plans which could see them co-operate, not just in sharing data over food shortages, but even on which stores close and which stay open, with retailers working together to ensure a minimum number of shops in any one area remain open.

This, in its own way, was just as extraordinary as car manufacturers and jet engine companies being urged en masse to switch production to ventilators for emergency wards.

Bitter retail rivals sharing staff and supply lines – which will require those laws to be axed, and fast – is almost as alien as being told you can’t attend a concert, go to church or even - if you have developed symptoms - leave your house for fear of arrest.

It’s no wonder the government is struggling with the job of communicating the message to the public. Just like the message that you can no longer buy what you want, the truth about the changes to everyday lives is a message nobody really wants to hear.