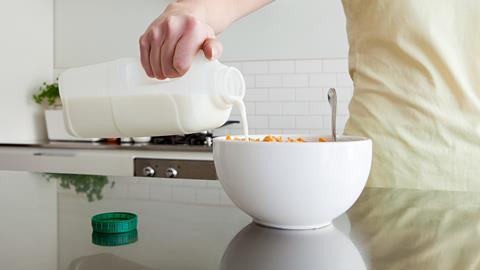 The nose knows. So believes Morrisons, which yesterday announced its intention to scrap use by dates on its own brand milk. Instead, the supermarket is encouraging shoppers to use the old-fashioned ‘sniff test’ to gauge whether to pour their pint over their cereal, or down the sink.

The aim is simple: to reduce the amount of milk unnecessarily going down the sink route. According to Wrap, an estimated 85 million pints a year are wasted due to customers sticking to use by or ‘once opened use within’ guidance. So taking use by dates out of the Morrisons own label range – which accounts for 90% of milk sold by the retailer – could make a sizeable dent in that number.

Such an approach may raise some eyebrows. After all, the FSA last year urged consumers not to trust the sniff test when it came to use-by dates. “Why? Because you can’t always smell (or taste) the bacteria that cause food poisoning,” the FSA said.

But the dangers in milk are arguably nowhere near as high as in other products that carry use by dates, such as meat and fish. So if Morrisons can make a go of its approach (already used across some of its own-brand yoghurt and hard cheese ranges), there is clear potential for other retailers to follow suit.

Brands, too, may be persuaded to go down the same route. After all, Morrisons is including milks supplied by Arla farmers in its initiative. And Arla has already shaken up its dating system. In 2019, the supplier announced its intention to switch from use by dates to best before labelling on its branded fresh milk.

But this prompts a wider question: if we can do without use by dates, what is the need for a best before? As the FSA has taken pains to communicate to the public, use by dates relate to safety, while best before relates to quality.

If we can trust consumers to determine whether items like milk, cheese and yoghurt are safe to eat without a date marker, there seems little justification for needing to spell out when products are at their peak quality. Especially when best before dates have been accused of creating a food waste mountain, due to items unnecessarily being thrown away once they pass the deadline.

True, there is some consumer resistance to removing dates entirely. A YouGov poll in 2018 revealed three quarters of shoppers use best before dates as a marker of the freshest products when shopping. Over a quarter (28%) said they weren’t confident at knowing how long they can keep their fresh produce without a date guide, and a similar percentage would question the quality of a retailer that sold produce without best before labels.

However, the same poll also pointed to the benefits of doing just that. Almost four in 10 (39%) said that if food didn’t have ‘best before’ labels, they would probably buy smaller quantities to ensure their fresh produce was used before going off.

That poll was conducted four years ago. Since then, food waste – and climate change more widely – have been treated with more urgency, and consumer reticence now feels like a flimsy justification for ruling out action. So here’s hoping that Morrisons’ move heralds a wider reappraisal of date labelling – one that considers whether best before is still best practice.