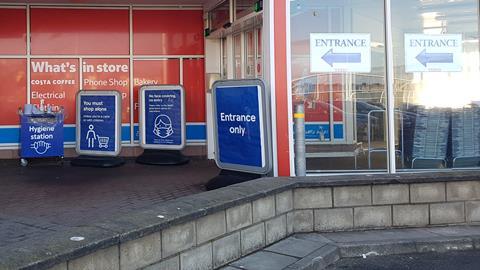 End of in-store social distancing will be down to the government, not Tesco

Tesco boss Ken Murphy today told The Grocer he was in “no hurry” to get rid of social distancing, stressing that, as the country emerges blinking from lockdown, safety remains its first priority.

But with a cool £900m knocked off Tesco’s profits in the past year by the pandemic – much of it from the extra costs involved in protecting the public from the virus, as well as bringing in tens of thousands of extra staff to cope – his shareholders will feel much more haste.

Outgoing Tesco finance boss Alan Stewart predicts the crisis will cost Tesco at least £200m in the following year. Which means escaping the shackles of Covid is the topic on everyone’s lips.

“The great unknown is social distancing and how long that has to stay,” says one leading industry source. “That is going to be the key determinant of any return to normal and whilst the government is very clear of what the situation is with hospitality, the situation for retailers is not yet so apparent.”

Now with the end of lockdown hopefully in sight, Murphy is right to be cautious about the speed of getting back to normal, whether that is with store numbers, Perspex screens, masks or other measures.

But his claims that consumers have been enjoying more choice and less queueing ring somewhat hollow, considering the large numbers that are still staying away from stores altogether and the huge switch to online.

As restrictions lift, the likes of Tesco will be desperate to get customers back in stores which, as Murphy says, remain the “backbone” of their operations and represent by far the most profitable part too.

Tesco may enjoy a 35% market share in online, compared with its 27% of the traditional market. But its major efforts are in stores, where it is pushing hardest on communicating its EDLP price war against discounters Aldi and Lidl, and seeking to ramp up its use of Clubcard –  two strategic areas highlighted by Murphy today.

He acknowledges things won’t return exactly to how they were before. The Tesco CEO referred to what he believed would be a “hybrid” model post-lockdown, which Tesco is preparing for with the opening of its second urban fulfilment centre in Lakeside next month. Four more are due later in the year.

But six UFCs – and the promise of an acceleration of the rollout next year – will not alter Tesco’s reliance on its store model just yet, or indeed for a long time to come.

The same is true for the rest of the supermarkets, if not more so. Until the government starts giving answers to that great unknown, getting rid of social distancing will remain the elephant in the room.