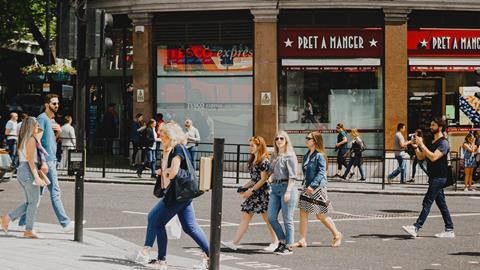 Reports of the death of food to go may have been exaggerated, if Morrisons boss David Potts is to be believed.

Potts declared today we are witnessing a “strong rebound” of the sector, which at the height of lockdown suffered devastating sales losses of almost 70%.

According to Kantar, no less than £8bn had vanished from food to go’s top line by October last year, with a slice worth almost £700m of that from supermarket sales such as meal deals.

Yet as Potts today described the pandemic as “firmly in retreat”, he claimed meal deal sales since the end of January had surged to a point they were now back above pre-pandemic levels.

“The pandemic is not yet over, but it is in retreat across Britain and there is much to be positive about as something approaching normal life begins to take shape,” said Potts.

“Our forecourts are busier and we’re seeing a strong rebound of food to go, takeaway counters and salad bars.”

Of course, we will need to know much more than a slice of Morrisons’ meal deal figures before the crisis affecting food to go can be declared anything like over.

Massive questions remain about how supermarkets emerge from lockdown, not least in how quickly they and other food businesses will be allowed to do away with social distancing measures, without prejudicing understandable customer nervousness about safety.

Potts today told The Grocer Morrisons would be sticking with the thousands of Perspex screens brought in to protect staff and shoppers, even though the BRC has called for social distancing measures to be ditched.

But after a year in which the focus has been on the shift to online shopping and a revolution in home working, and with parts of many city centres having resembled ghost towns since the pandemic began, a bounce back no longer looks quite so far off.

Yesterday, Greggs forecast a return to pre-Covid levels quicker than expected, after sales at the bakery chain surged as shoppers flocked back to the high street. Its like-for-like sales compared with two years ago (now the benchmark everyone is talking about) have been positive since April.

Tesco clearly thinks so too, given today’s announcement that it will welcome Pret a Manger concessions, starting with next month’s opening in Kensington, albeit only in four stores.

That’s hardly going to shift the dial, but it’s a further sign of hope for those eager to remember what life was like before March 2020.

Who would have thought we would ever be nostalgic for the days of the 250-metre queues of city workers snaking around Tesco in Tooley Street, London, or Morrisons in Manchester Piccadilly.

The pandemic has done strange things to us all.