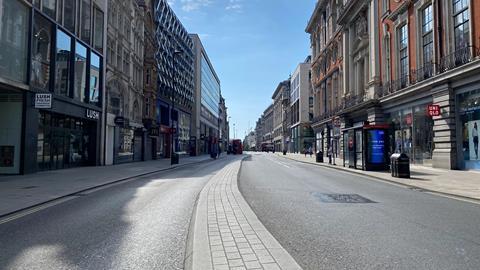 Forget mass evictions, retailers are in a far stronger position than they may seem

Here we go again. As the expiry date for the government’s emergency tenant protections looms closer – due to end on 31 March, following yet another extension in December – the headlines about retail hurtling towards a cliff-edge of evictions have once again resurfaced. It’s become something of a well-worn routine by now, the stories rearing their head as each quarterly deadline approaches.

But tenants and landlords agree that, while retailers face many challenges, property owners itching to evict are not among them.

That’s because “it’s very much an occupier’s market, which really leaves property owners in a difficult position,” says British Property Federation director of finance policy Ion Fletcher. “It means they are likely to do whatever they can to hang on to the occupiers they do have.

“When we hear about owners waiting in the wings to evict occupiers when the moratorium lifts, I can’t see that as being in their interests at all and I would expect that not to happen,” he adds.

Indeed, a tenant with a year’s worth of rent debt is still preferable to the most likely alternative, should they kick them out: a vacant property.

Figures from the BRC and Local Data Company last week put shop vacancy rates in the fourth quarter of 2020 at 13.7%, compared with 13.2% in quarter three. That was 1.6 percentage points higher than quarter four a year earlier, and the number of closed shops “will only go up”, according to BRC CEO Helen Dickinson.

In shopping centres, the rate was higher still at 17.1%. Even in retail parks, a location faring better through lockdowns, vacancies accounted for 10% of units.

Shops have been left empty by a wave of CVAs, an insolvency procedure that typically results in closures and/or rent cuts. According to the BPF, 33 major retail and hospitality businesses launched CVAs in 2020, three times the number in 2019.

A number of top retail property agents recently told The Grocer how the pattern was feeding into the hands of variety discounters. As one of the only types of retailer to both trade through lockdown and still expand their estates, they have become able to “dictate” lease terms.

Perhaps unsurprisingly in the current climate, the favoured terms of those retailers and their landlords are not aligned. A major challenge for landlords is finding new ways to value a shop, says Fletcher. One way is by linking rent to turnover, and such arrangements are becoming commonplace with some non-essential retailers.

The problem for landlords is, ”the likes of Wilko, Poundland, the discounters and the supermarkets don’t want that”, adds Fletcher. They don’t want it because they would end up paying more in the event of improved trading.

As Poundland head of portfolio management Ben Wall told The Grocer last year, they would prefer the landlord simply recognise the property is not worth what it was. Turnover leases “avoid the need for the valuation of the property and unfortunately the valuation is the inconvenient truth for a lot of landlords”, Wall said. “In the majority of areas, values have fallen. Agreeing turnover rent to protect the value is not the right thing to do.”

For the moment, variety discounters are using their might to insert more favourable terms into leases, such as ‘Covid clauses’, providing them with protections in the event of further lockdowns. Last summer, Poundland was insisting on such clauses in all new property deals. “Understandably, it’s something property owners are a bit wary of because they don’t quite know what sort of exposure they are opening themselves up to,” says Fletcher.

Other concessions won from landlords include rent-free periods – undermining any rationale for evicting a tenant over non-rent payment – contributions to store fit-outs, and the widespread move to monthly payments instead of quarterly.

That retailers are able to push for these more favourable terms highlights just how much landlords need them.

So even if the government doesn’t extend protections for retailers beyond 31 March – and history would suggest any such extension will come at the last minute, as has been the case each quarter since last March – it is unlikely to result in tenants being turfed out left, right and centre.

In November, BRC property policy advisor Dominic Curran cautiously predicted to The Grocer that, even if the ban on evictions was lifted at the end of that quarter, on 31 December, it would not prove so disastrous for retailers. So weakened was the hand of landlords, they would only use the power against retailers who looked truly unable to ever trade their way out of debt.

More worrying was the prospect of landlords regaining their power to issue statutory demands and winding-up petitions, and becoming an “existential threat” as retailers battled to trade their way back from the brink, Curran said.

Concern over an end to the evictions ban proved unfounded in December, as all three moratoria were extended for another three months. But with the new deadline approaching and fears once again mounting, Curran’s prediction is just as applicable now.