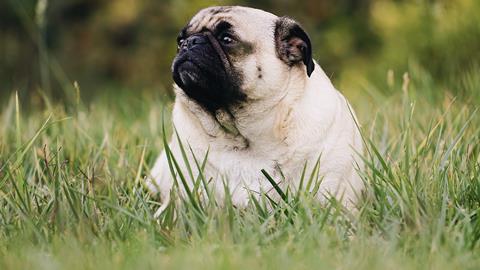 Grocery has a duty to battle obesity in pets, not just people

The UK’s pet owners have a big problem: a growing number of their cats and dogs are obese.

Vets estimate they are treating 49% more overweight pets than last year, according to a survey by insurance provider Direct Line.

It found more than 1.7 million dog owners and one million cat owners in the past year had been told by vets that their animals were too fat. That means 12% of the country’s dog owners have an excessively heavy four-legged friend – with pugs, boxers and golden retrievers most prone to weight gain.

It would be easy here to make gags about ‘fat cats’ and ‘portly pups’. But the results of Direct Line’s poll are too serious for that. Obesity can just as easily lead to heart disease, breathing problems and diabetes in canines and felines as it can in people. It’s no laughing matter.

And yet too many pet owners don’t seem to care, according to Direct Line. More than half admitted to overfeeding their animal to show it affection, and about the same proportion believed vets were overly cautious about obesity in pets. Alarmingly, nearly a third of owners did not take animal obesity seriously, vets claimed, and one in six did not even believe animals could be medically obese.

These troubling findings come months after a survey by Mars Petcare’s Royal Canin discovered that a third of dog owners shared their takeaways and fast food with their fur babies – a habit that can lead not only to obesity-related illness but also skin problems and tooth decay.

Frankly, it’s all very baffling. People humanise animals nowadays arguably more than ever. The behaviour is illustrated by the trends in petfood that reflect our own health-centric diets: grain-free, plant-based, flexitarian, functional and so on. And yet too many of us are risking the lives of Rover and Mittens through overfeeding or feeding them junk – instead of doing to them as we do to ourselves.

Here lies an easy opportunity for grocery. The industry is playing its part in warning against human obesity. There seems little reason why it couldn’t – or, indeed, shouldn’t – extend its considerable influence to improve the lives of our beloved pets too.