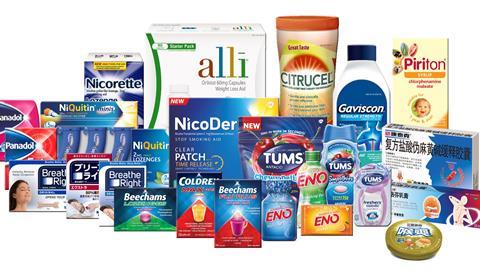 GlaxoSmithKline finally set out plans for the ‘new GSK’ last week – and it’s a future that will no longer include consumer fmcg and over-the-counter health products.

Having faced an investor revolt after its performance lagged its pharma giant contemporaries, GSK has decided to split the group to spin off its consumer arm, which includes well-known brands such as Centrum vitamins and Sensodyne toothpaste, into a separate business.

The split won’t occur until next year, so details of the new consumer business remain fairly scant at this stage – with under-pressure boss Emma Walmsley focused on convincing investors that the move will accelerate growth in the remaining pharma business.

GSK has said it will have a listing on the London Stock Exchange and that it will retain a 13.6% share in the business, which it will gradually sell off over time.

The plan has been met with nods of approval from a previously discontented investor base – there had been fears the consumer business could be split off via a full IPO, which would have raised instant cash for GSK but left investors having to buy back in to the new group or see the value of their stakes in the consumer arm fall.

With wider focus remaining on the prospects of the remaining pharma arm, it’s been somewhat overlooked what a significant company the new consumer business will be.

It will not just be in the FTSE 100, but current consumer boss Brian McNamara has suggested it will be in the top 10 to 20 London stocks by market cap, with some analysts valuing it at as much as £45bn.

Since merging its consumer business with Pfizer’s in late 2018, the GSK consumer arm has been the sector’s biggest market player.

According to Barclays, GSK has a 5.4% share of the global consumer health market – well clear of its nearest rivals Johnson & Johnson (3.3%), Bayer (3%) and Nestlé – following its recent acquisition of Nature’s Bounty – at 2.7%.

Notably, its biggest brand is also in the fastest-growing area of the market – with Centrum vitamins the largest player in the vitamins, minerals and supplements segment that has been particularly boosted during the Covid outbreak.

GSK’s vitamins arm more than doubled in revenues last year, while the market was up 4.8%, according to Barclays, and has a 4%-5% medium-term growth projection, compared with 2%-3% in OTC medicines.

Traditional OTC treatments – such as flu remedies and pain relief – have come under pressure as people have mixed less during Covid. But the pandemic has also seen consumers shift more towards pre-emptive health management, which has benefitted those with exposure in vitamins.

Indeed, those same consumer trends have made it a hot sector for more traditional fmcg groups.

Nestlé paid $5.8bn for Nature’s Bounty’s range of vitamins and supplements in April, while Unilever has made three separate bolt-on vitamins acquisitions over the past year (Liquid IV, Smartypants, and Onnnit) as well as the 2019 acquisition of Olly Nutrition.

Current appetite for consumer health led to speculation that rivals might be eyeing GSK’s consumer business themselves, given the pharma giant’s long-held desire to shed the division and raise cash.

There would be huge appetite for GSK’s consumer portfolio given its premium brands, but its sheer size creates complexities in terms of a combination with other companies looking to push growth into the space.

Reckitt Benckiser has long been tipped as an ideal destination – indeed Reckitt itself made a play for Pfizer’s consumer health unit before it merged into GSK.

But Reckitt now lacks the balance sheet strength to drive through a merger of such scale and is focused on tidying its portfolio after its humbling exit from its Chinese babymilk business.

Other potential suitors, such as P&G or Unilever, are unlikely to have the appetite to swallow such a huge business when they’ve also been concentrating on portfolio optimisation and bolt-on acquisitions in recent years. Nestlé, which is clearly keen on consumer health and has been increasingly acquisitive, is unlikely to want huge exposure to the GSK/Pfizer JV’s pharmacy-only medical brands.

However, there is little doubt the sector remains ripe for consolidation.

Barclays’ review of the sector noted that the top five companies account for just 16% of the market – which is less than half most health and personal care categories.

“Consumer health is highly fragmented and is ripe for consolidation as category attractiveness has increased… Strong brand loyalty and high gross margin profile make the category stand out” the broker said. “We see limited competition or antitrust issues as few companies have double-digit shares in any market/category.”

In a recent interview, McNamara told The Financial Times the newly spun-out business would pursue acquisitions in growth areas, despite being loaded with a heavy debt pile as a result of the spin-off.

He told the FT the yet-to-be-named business will have the appetite to do smaller, bolt-on deals, particularly in the vitamin mineral supplement side of the portfolio, which remains a significantly fragmented market.

The prospects of a sector-shaping megadeal – one which some GSK investors had previously hoped for to raise immediate cash – to trump the planned spin-off and listing, look remote.

But as a major new FTSE 100 consumer giant emerges, and conventional fmcg players increasingly push into the category, Covid changes the dynamic of the market, and smaller players look ripe for consolidation, making consumer health a major fmcg market to watch in 2022.