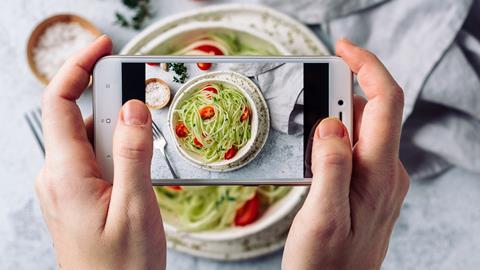 You can’t blame Heston Blumenthal for being a bit miffed. Having spent years perfecting the taste of his grub with methods such as liquid nitrogen, triple cooking and sous vide, he arguably needn’t have bothered.

Because visitors to his restaurant The Fat Duck seem more interested in taking pictures of the food than eating it, he complains in an interview with the Radio Times today. Food is going cold for the sake of a perfect photo op, he says (though it is hard to fathom why an iPhone snap would take that long).

Paying massive sums of money to eat at The Fat Duck – in 2015, it was lambasted for charging £255 for a tasting menu – only to let your food go lukewarm seems the very definition of lunacy. Yet it shows just how social media is transforming the way we eat. Aesthetics have now become of paramount importance in the dining experience.

That mindset is most evident at restaurants like Heston Blumenthal’s, where diners are expecting show-stopping presentation. But it’s also influencing grocery. After all, it’s not hard to think of innovations that have been strongly led by aesthetics. The launch of Kellogg’s Joyböl, for example, was inspired by the prevalence of smoothie bowls on Instagram. Waitrose launched a charcoal pizza after charred food gained reams of likes of social media. And the rise of green juices – most famously celery juice – certainly can’t be anything to do with taste.

Still, this faddy stuff isn’t the real trend here. Because the majority of food pictures on social media are not of wacky, innovative fare (pizza is actually the most popular food on Instagram). And while users are keen to show off unusual high-end restaurant creations, they are equally enthusiastic about showcasing their own, more ordinary culinary wares. Indeed, the #homecooked hashtag has three million posts on Instagram. These posts largely include hearty, classic dishes that promise to taste as good as they look.

Which means that underneath all this focus on aesthetics, the passion for simple, great-tasting food remains. The rise of food pictures is simply making cooking and eating more of a sociable, shareable experience that is worthy of conversation. Which can only be a good thing – as long as it doesn’t mean your £255 meal is left to go cold.