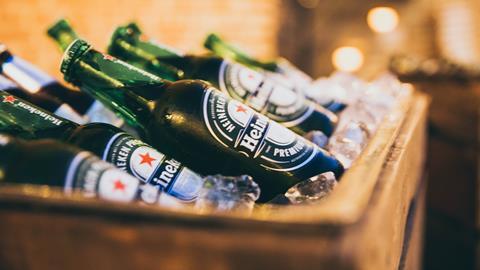 With a twitch of a shoulder and flick of his boot, striker Cristiano Ronaldo can terrify even the world’s strongest defenders. And with a single gesture, he can do the same with Coca-Cola executives.

At a Euros news conference in Budapest on Monday, the Portugal captain moved two bottles of Coke out of camera shot. Then he raised a bottle of water and declared “Agua!”. It was enough to make headlines around the globe – and cause Coca-Cola’s share price to temoprarily dip by 1.6% (the equivalent of about £2.87bn).

That’s fine, said a Euros spokesman. “Everyone is entitled to their drink preferences.”

There was a curiously similar scene the following day when, at a post-game conference in Munich, France’s man of the match Paul Pogba silently hid a bottle of Heineken from view. His action was also reported worldwide.

It’s brought the game of product placement into disrepute as never before.

Yet, neither player’s gestures ought to have come as a surprise. After all, Ronaldo is a fitness fanatic – as anyone who’s seen him shirtless will know. It’s why, at the age of 36, he’s still among the greatest goal-scorers on Earth.

Indeed, while several football superstars have endorsed Pepsi Max, it’s notable that among Ronaldo’s numerous, generous sponsorship deals, only one, Herbalife, currently involves a food and drink brand. That gives him licence to express his views and values (even though, as The Sun pointed out today, he’s previously promoted Coca-Cola, as well as KFC).

Pogba, meanwhile, is a prodigiously gifted midfielder. But it was his religion, not his training regime, that made him do what he did this week. He’s a devout Muslim. So, while he hasn’t objected to tacitly endorsing Pepsi, of course he doesn’t want to be associated with a beer brand (even if the drink he moved was 0% abv).

Frankly, it’s surprising Coke and Heineken, both official sponsors of the Euros, did not take into account the players’ well-known predispositions. They will surely do so now. As two of the tournaments’ powerhouses, Ronaldo and Pogba are probably going to be in front of camera often.

So, Coke would be advised to fill lenses only with its Glaceau Smartwater brand whenever a famously ripped dude is answering questions. And Heineken probably ought to simply avoid anyone whose religion strictly prohibits the consumption of alcohol.

Still, at least the news conferences were only minor marketing disasters. After all, they weren’t on the scale of, say, Pepsi’s 2017 TV fiasco starring model Kendall Jenner – which drew accusations of trivialising protests against the killings of black people by police officers.

Above all, this week has shown that while multibillion-dollar soccer sponsorship is serious business, the power wielded by international footballers is growing. They aren’t going to bend to the will of even the biggest brands (at least, not unless they get handsomely paid to do so).

And while their personal brands aren’t as powerful as Coke or Heineken, they’re influential to millions of fans. When they do something, many people copy – whether it’s a bicycle kick or shunning a soda. As Khalid Peerbaccus, senior consumer researcher at GlobalData, says: ”Ronaldo’s decision to shine the spotlight on water rather than Coca-Cola is one that may resonate with 57% of consumers globally.”

It goes to show that even product placement can be politicised. Something for food and drink brands to bear in mind if they want to avoid such own goals in future.