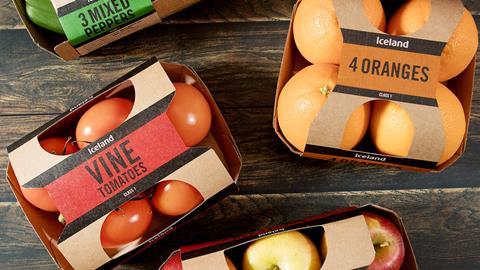 Having just published his new book ‘The Green Grocer’, Iceland MD Richard Walker was no doubt hoping for a better result than the retailer coming bottom of the pile in Greenpeace’s latest plastic reduction league table.

Walker’s new tome, billed as “one man’s manifesto for corporate activism’, promises to help other retailers become greener. The back-cover blurb even cites reducing single-use plastic as one of the ways Iceland is “effecting real change” in the supermarket sector. And with good reason. Iceland has slashed levels of own brand plastic by a third since 2017, and has been one of the retailers driving more transparent reporting on plastic and pioneering trials of deposit return schemes.

However, today’s report by Greenpeace and the Environmental Investigation Agency (EIA), ranks Iceland last among the supermarkets for plastic progress. Revealing the supermarket sector put out 900,000 tonnes of plastic packaging in 2019, it slams Iceland for selling 73 million more bags for life in 2019 than it did in 2018.

Still, there’s more than meets the eye in Iceland’s descent from hero to zero in the Greenpeace survey – which it came top of when it first ran in 2017.

For a start, Greenpeace’s reporting on plastic hasn’t always been completely accurate.

Last year, it declared Aldi had massively outsold Tesco’s number of plastic water bottles, only to later admit the discounter had mistakenly reported on individual bottles, not packs.

And a furious Iceland claims the problems with the report go much further than just “inconsistencies in reporting”.

There is no doubt the methodology used by Greenpeace puts much weight on certain ‘pet projects’. Such as the rollout of loose fruit & veg and trials of refill aisles by the likes of Asda and Waitrose (the survey’s winner), which are attention-grabbing but currently unproven to be practical on a national scale.

Iceland also argues that the report ignores economic reality. Not just because it isn’t linked to any sort of price index, but because it suggests a retailer like Iceland should sell more fruit and veg. Even though when it launched such a trial, sales bombed by 30% and, it claims, food waste shot up.

Again, Walker and co have a point. If environmental campaigners really want to effect change, they must be in touch with reality.

Still, Iceland’s feud with Greenpeace is a painful reminder of the bigger problem here. Which is that the industry has allowed reporting on the war against plastic to be hijacked, because of the void of reliable and up-to-date reporting.

Despite efforts by Wrap to encourage more transparency, the latest set of results from the industry’s UK Plastics Pact were underwhelming to say the least. Not only did they show “mixed results” in tackling plastic, but they were (by Wrap’s own admission) painfully out of date.

The same is true of today’s report.

Amid all the coverage of how supermarkets are failing to stop the tide of plastic, it’s been widely missed that the data in Greenpeace’s report predates the pandemic. So it takes no account at all of the soaring numbers of plastic bags used for online deliveries, or the impact of companies doing away with loose fruit & veg in store because of safety fears over the virus.

How can we make an accurate assessment on the latest situation by completely ignoring the impact of Covid?

The fact is all retailers have far more up-to-date figures on plastic use than those used in either of these reports. For a start, all companies have to report on a breakdown on weight of plastic in packaging, for own label and branded goods, and a breakdown of the different types of product involved, as part of the Packaging Recovery Note system.

With a sweeping reform of PRN due to be considered in a government consultation to be launched in the next few weeks, alongside a further consolation on how the launch of a long-awaited DRS system can possibly happen during the pandemic, surely the time has come for the government and stakeholders to insist on a more transparent system.

Otherwise, reports like today’s from Greenpeace risk being an attention-grabbing sideshow, while the real challenges and the need for meaningful updates on progress get kicked down the road like a discarded drinks bottle.