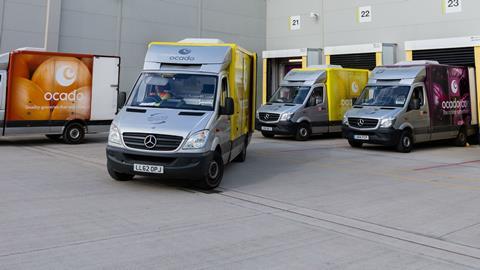 M&S switchover complete, but Waitrose is the least of Ocado’s problems

A “major transformation”, “massive transition” and “historic moment”. Ocado CFO Duncan Tatton-Brown was in gushing form this morning, as he presented its Q3 results on Ocado Retail’s switchover from Waitrose to M&S at the start of the month.

It hasn’t gone without a hitch. An unexpected late surge in demand saw several customer orders cancelled at the last minute. But issues were “very slight”, all in all, Tatton-Brown insisted, with any disruption to customers “very minor”.

But the long-awaited switchover day was arguably the easy bit. Now begins the tougher tasks of retaining Waitrose customers, gaining M&S customers and maintaining the high customer service levels upon which Ocado has long prided itself.

Waitrose, perhaps unsurprisingly, has not been entirely helpful in the break-up. It told The Grocer last month that several products had “been run down in readiness for the split”. Facing out-of-stocks on Waitrose favourites, Ocado.com shoppers may have been tempted to a beefed-up Waitrose.com offering. More may well be drawn away by online promotions like £18 off £100 orders, or a coming drop in minimum basket spend to £40 from £60. And free delivery, of course.

Meanwhile, despite a major Waitrose product-matching exercise from M&S, several withdrawn Waitrose items have not been replaced. The Grocer’s Online 33 earlier this month identified own-label chicken goujons and carbonara sauce among items for which an M&S version couldn’t be found (though it has lots of breaded chicken products, just not using the same goujons terminology). Other items that have not made the cut include frozen chopped shallots and Waitrose bread mixes, which Ocado insists was because they were selling in minuscule volumes. But you under-evaluate the significance of small-selling items at your peril.

Was there an impact? Not according to Tatton-Brown, who this morning claimed “practically no sign of any loss of customers”.

But data from Ocado’s own systems, seen by The Grocer, shows that total weekly shoppers fell from 321,000 w/c 17 August, to 278,000 in the crucial w/c 31 August, a drop of 37,000 shoppers in two weeks. This could be explained by summer holidays, according to Tatton-Brown. And to be fair, weekly shopper figures w/c 7 September recovered somewhat to 304,000.

The challenge of gaining new M&S customers also looms large, however. Ocado simply cannot build extra capacity quick enough to serve them. Its million-long waiting list has barely been dented, Tatton-Brown admitted today. Adding extra capacity is “nigh-on impossible” this side of Christmas, and won’t happen in any meaningful way before sometime next year.

Many lingering on Ocado’s waiting list may soon run out of patience – and make the switch to another provider.

But straining to onboard customers risks denting its customer service levels, which Ocado Retail CEO Mel Smith has boasted to be the best in the country. Customers are already reporting longer waits for slots and a return to lockdown-like availability.

As one tweeted: “Unfortunately too excited taking on new people and not thinking about the fact they can’t deal with the extra deliveries! I think I’m falling out of love…”

So, while today’s results showed average orders per week in Q3 to 30 August had increased 9.4% to 345,000 on the same period last year, Ocado’s ability to serve is limited, and it’s not just Waitrose that can pick up the pieces.

Ocado’s capacity is dwarfed by the likes of Tesco, which has increased delivery slots from 600,000 earlier this year to 1.4 million. That’s more than double Ocado’s total capacity added in the past six months. And others have made gains of not dissimilar magnitude, with Morrisons the latest to crow about its growing online capabilities at its results last week.

Surviving switchover day was indeed a massive moment for Ocado. But it now faces even mightier challenges and challengers.