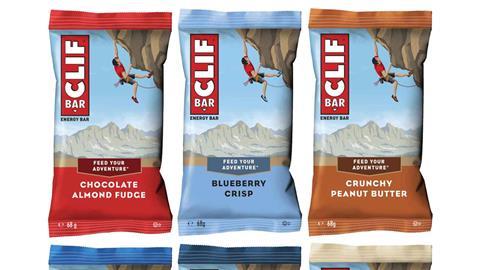 Cadbury, Oreo, Milka… Mondelez International’s most famous brands aren’t exactly known for their health credentials. But the confectionery giant is hoping to change its image with the acquisition of Clif Bar & Company for $2.9bn, announced today. As part of the deal, it has set out plans to expand the global energy foods business.

The move comes as part of a larger push by Mondelez to tap the healthier snacking market. Last year, for instance, it snapped up protein bar maker Grenade for £200m. Mondelez must be confident it can make the big bucks from pushing more nutritious fare.

And why wouldn’t it be? After all, Grenade’s Carb Killa bars were already outselling single Mars bars in the UK ahead of the brand’s acquisition by Mondelez [IRI 52 w/e 24 January 2021].

Mondelez’s rivals haven’t been standing by idly amid this shift in buying behaviours. Mars itself has been busy innovating, as shown by this month’s launch of Triple Treat – a range of non-HFSS versions of Mars, Snickers, Bounty and Galaxy, made of date paste, raisins and peanuts.

The confectionery giant is even banking on consumers being willing to pay more for this healthier twist on its treats. The non-HFSS lines ring in at 80p per 40g bar, making them 57% more expensive than the original bars.

Ferrero, too, is looking to capitalise on the healthier snacking market. After acquiring Eat Natural in 2020, it unveiled a trio of non-HFSS ‘raw’ fruit and nut bars under the brand this month, acknowledging a growing demand for “alternative” snacks.

However, this activity comes with a word of warning. Fmcg giants haven’t always been successful in this space, as evidenced by Kellogg’s acquisition of US protein brand RX Bar for almost half a billion pounds – only to axe the brand in the UK just three years later.

Perhaps the brand was ahead of its time. According to serial fmcg investor and former Metcalfe’s CEO Robert Jakobi, the US “was always four or five years ahead of the UK” in the healthier snacking space until very recently. Following on from the pandemic, however, UK shoppers “want to look after themselves better. They’re very focused on their health and wellness”, he says.

There was also a potential issue of overly US-focused branding, as arguably not many UK consumers would know what an ‘RX’ is (a commonly used term in the US for prescriptions).

Those points may be true, but there is also a more general challenge illustrated by the Kellogg’s/RX Bar acquisition. When giants such as Kellogg’s snap up smaller, health-led brands, there is a risk of alienating their existing fanbase and changing the culture that made them successful in the first place. That could prove tricky for Mondelez in its acquisition of Clif Bar. After all, Clif is a niche brand trusted by outdoorsy types, like cyclists and climbers – the kind of shoppers who are more likely to be turned off by its acquisition by a huge, faceless corporation.

At the same time, Mondelez is making concerted efforts to bolster its sustainability credentials. It’s spent recent months publicising its move to renewable energy and its efforts to reduce its plastic packaging. Perhaps the move to acquire Clif – which has previously shouted about its green agenda – will help it gain kudos.

Either way, the move is indicative of a huge movement away from sugary treats to functional, added-benefit snacks: empty calories are increasingly leaving investors and consumers dissatisfied.