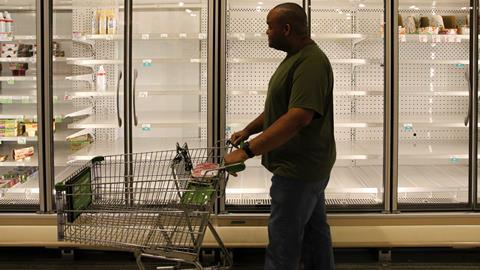 With the UK bracing itself for new lockdown measures that look increasingly likely to last until Christmas, it’s easy to see why people are too consumed with today’s misery to look back at lessons from the first lockdown.

That’s good news for the government, which appears to have escaped incredibly lightly after issuing a defence of its handling of the crisis – and its impact on the food industry – that is truly Trumpian in its blurring of the facts and denial of wrongdoing.

On Saturday, ministers issued their response to a damning Efra Committee inquiry into the effect of the pandemic on the supply chain, published in July. While it would have been naive to expect this government to hold its hands up to any suggestion of incompetence, the scale of its buck-passing and lack of lessons learned truly beggars belief.

There are so many holes in the government’s response it’s difficult to know where to begin. But there are a few areas that stand out.

Perhaps foremost among them is its outright denial that the UK saw any panic buying and general food shortages in March, despite it being obvious for all to see. Efra’s report, based on evidence from various key industry groups such as the FDF, BRC, the ACS and the FWD, called on ministers to act as “a matter of great urgency” to prevent a repeat of the scenes that forced the introduction of buying limits in supermarkets. A whole raft of food products were stripped from the shelves – not just loo roll and sanitiser, but tinned foods, pasta, rice, fresh meat and bread, among others.

Yet according to the government no such situation happened. This was, it claims, all down to exaggeration in the media, with stockpiling confined to “certain longer-life products”.

Either ministers were so blissfully unaware of the reality they didn’t realise how severe the shortages were in those first days of lockdown, or they are just twisting the facts.

Health minister Matt Hancock famously made up claims that the government had been in close talks with supermarkets before the lockdown, but the latest government response dreams up an even more fictional version of events, which would be comical if it weren’t so serious.

The Efra Committee inquiry accused ministers of failing to listen to retailers’ repeated warnings that their online capacity at the time of lockdown was insufficient to cope with demand for food during the crisis, which led to a massive shortage of online slots and risked millions of vulnerable people going hungry.

Yet despite supermarket leaders suggesting otherwise, ministers say they listened and acted quickly to respond to the concerns that online capacity was being flooded.

The government also completely passes over calls led by the industry for the appointment of a ‘minister for food security’ to ensure cross-departmental preparedness in the event of similar crises.

It fails to give any commitment to the committee’s calls for continued funding to ensure food redistribution charities, such as FareShare, can continue to reach food banks and other helpers on the ground.

And on the subject of worker safety, the government denies being too slow to issue guidance on the protection of workers in the food industry, despite the FDF accusing ministers and PHE of “unbelievable” delays.

In fact, the response promises only to “continue to monitor” the issue of food insecurity. Its only real commitment is a response to the national Food Strategy within six months of publication – a document that won’t be published until next year anyway, by which time the second wave and the Brexit transformation period will have come and gone, leaving who knows what harm in their wake.

Yet these are the words ministers use to summarise their learnings from the initial lockdown.

“We will use the experience gained from the unprecedented situation we faced in March 2020, to tailor our communications and how we work with industry to deliver better aligned and joined-up communications in response to similar scenarios in the future.”

It doesn’t take a SAGE expert to diagnose that as a load of hot air.

Yet as this article went to press, the final outcome of Efra’s important inquiry was largely ignored by every news outlet in the land. It’s perhaps an indication that lack of leadership, failure to own up to mistakes and lack of a clearly communicated plan for the crisis simply no longer has the ability to shock.