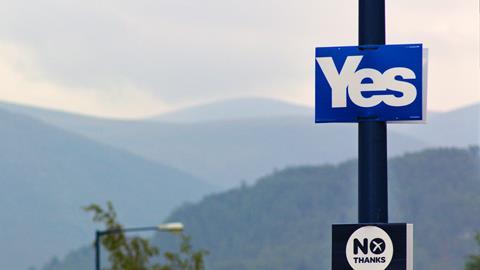 The EU’s chief Brexit negotiator Michel Barnier warned we were no closer to a trade deal earlier today, after another round of inconclusive negotiations led him to claim the UK “had not shown a willingness to break the deadlock”.

But as Boris Johnson prepares to mark a whole year as prime minister tomorrow, his main priority today was not our future relationship with the EU – it was how he planned to keep the fraying constituent parts of our own union of four nations tied together.

You may remember, when he bounded into No 10 during those carefree days of a year ago, that Johnson appointed himself ‘minister for the union’.

But with the devolved administrations going their own way on coronavirus lockdown policies, his praise for the “sheer might” of the UK as a collective arguably ended up a damp squib.

It probably didn’t help that the PM’s visit to Orkney and the north of Scotland to see a few hand-picked supporters was overshadowed by booing independence protestors at what later trended on social media as the #BorisFarewellTour (to the union, geddit?).

But despite the fact we’re still a long way from a second Scottish independence referendum, his visit to Scotland and the flexing of muscles when it comes to post-Brexit trade policy and plans for the internal UK market shows the UK government is becoming nervous public opinion in Scotland is shifting.

This nervousness will have been accelerated by the fact the UK government is seen as increasingly distant to many in Scotland (and an increasing number in Wales and Northern Ireland, too).

Indeed, support for an independent Scotland is currently at 54% according to latest polling, and while Johnson has vehemently resisted a second referendum, a strong majority for the SNP in next year’s Scottish parliamentary elections may force his hand.

But what does this mean for the grocery sector, I hear you say.

As The Grocer reported extensively on in the run-up to the last Scottish referendum in 2014 and the Brexit referendum two years later, a second vote would heap even more pressure, complexity and uncertainty on our food supply chains.

If Scotland voted ‘Yes’ this time, the rump of the UK would lose some of its most valuable food exports in the form of salmon and whisky – and that’s just for starters.

There are many more permutations that could also rear their head – at probably the worst time possible for a sector reeling from Brexit uncertainty and the effects of the coronavirus crisis.

As City University’s professor Tim Lang wrote in his Grocer column in 2014, what would happen when it came to food logistics, taxes and dietary policy? There would also be much more to consider in the form of food prices, food safety regulations, packaging regulations and the environmental impacts of food production, among many more challenges.

Such concerns are arguably the last thing the food sector needs right now. But for many in Scotland, there’s unfinished business, and the food industry could again find itself right in the middle of things – whether it likes it or not.