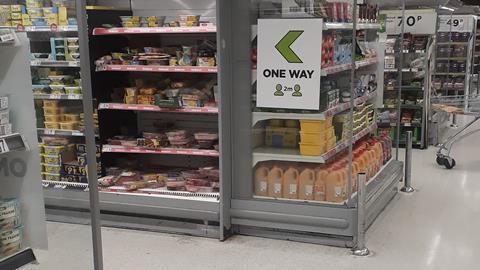 Independence Day is looming. And this time, it won’t just be celebration of US patriotism  –  it will hold some newfound freedoms for Brits, too. Yes, Britain is forecast to splash out up to £200m this weekend, when pubs open their doors for the first time in three months.

It could be a recipe for chaos, given the scenes we have already seen on beaches. But it won’t just be the Bournemouth beach litter patrol holding its breath this weekend. As the unwitting pioneers of social distancing, supermarkets will also be hoping and praying that certain police chiefs’ warnings of “apocalyptic” scenes are overblown.

Although they have been praised for helping keep shoppers and staff safe – and so far avoided the stigma that has been attached to food factories – supermarkets will be keen to relax rules.

Last week The Grocer revealed all the major supermarkets were reviewing their social distancing rules, and could scrap two-metre distancing on the back of the PM’s easing of lockdown measures from 4 July.

Tesco boss Dave Lewis said on Friday it was closely looking at how the relaxation of rules could be incorporated in stores. It’s an important decision, given how it changes shopper behaviour. Despite the near doubling of Tesco’s online sales in the past three months, Lewis expects to still end the year with overall sales flat because of the impact on in-store like-for-likes.

That highlights the underlying issue of cost. The BRC estimates supermarkets have spent well in excess of £150m on measures in stores, and the real cost of the restrictions runs much deeper.

Until shoppers can relax in store, the nature of their trips will not return to the pre-outbreak pattern. Sales will continue to be dominated by low-margin essential items and the shift to more expensive online fulfilment options will march on. So the sooner supermarkets can dispense with the sort of measures that make shopping an endurance exercise rather than an pleasure, the happier they will be.

Against that backdrop, some supermarkets have already started removing restrictions. One-way systems (a store merchandiser’s worst nightmare) have been widely abandoned, and Iceland said it would not be replacing two-metre distancing markers in the first aisle of its stores. “We believe customers now have a good understanding of appropriate social distancing and no longer need these visual reminders,” said a spokesman.

The latest test of whether the public are ready and able to self-police comes in Scotland today, as thousands of non-essential businesses with street access open their doors for the first time since lockdown. While they will be thankful to supermarkets for showing the way, these stores are about to experience the huge practical difficulties and costs of operating under social distancing.

The supermarket pioneers will be hoping it all goes off smoothly, so they can start rolling back the signage, cutting down the queues in their car parks and getting the tills ringing to a more normal tune.