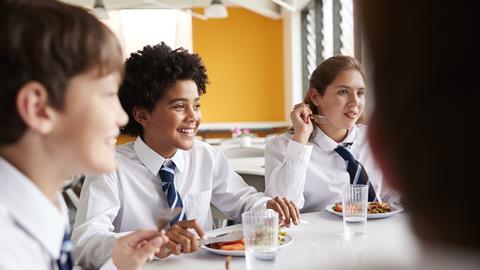 School meals shouldn’t be a political football: kids have the right to eat

It has been a funny old week for Marcus Rashford, as they might say in football land.

Firstly, on Tuesday he scored the winner in a crucial Champions League tie away to Paris Saint-Germain. But on Wednesday, MPs voted down a Labour motion to extend the free school meals scheme to cover all holiday periods.

The motion followed a petition the Manchester United and England star raised on the issue, which received more than 300,000 signatures in a matter of days.

It is truly astonishing how this issue has been turned into a political football, and quite shamelessly so, by the government.

Remember this is the same government that advised on awarding Rashford an MBE for his campaigning efforts to extend the scheme over the recent summer holidays.

Did they forget that school holidays happen at the end of every term, or think that the same issues that existed in July would be solved by October?

Maybe they thought that by praising Rashford and giving him a medal, it might make him go away and forget all about it. Well, guess what? It didn’t and now the same kids who needed help in the summer will need help over half term, at Christmas, at Easter and no doubt next summer as well.

Rashford, for his part, remains one of the coolest heads in the whole debate. He is not about scoring points or winning popularity or elections. At his most frustrated yesterday he tweeted: “I despair that we are using the topic of child food poverty to one-up each other.” However, he went on to continue to offer to work with politicians to find a solution.

Of course, there isn’t an endless pot of money that can solve every problem and the government can’t fix every Covid-related issue simply by writing another cheque. But we are talking here about the basic fundamental right to eat and government must prioritise that, along with fighting this horrible disease, above all else.

Today, food redistribution charity FareShare, which has been able to distribute the equivalent of 16 million meals since the pandemic began, has renewed its appeal for donations of surplus food ahead of what is called a “winter of hunger”.

It is great to see the grocery sector responding to this challenge already, but there is so much more help needed. We all need to do all we can to alleviate food poverty, for kids and adults alike, and the government has to do more.

This issue isn’t going to go away, and neither is Rashford. This isn’t the time for party politics, it’s a time for us to be better people and for politicians, as well as footballers, to be heroes.