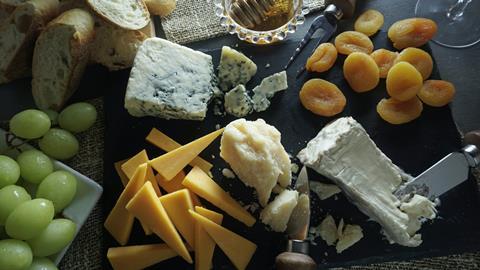 Fitting a cheese course in at the end of a meal is always a bit of a challenge. Turns out, the same could be said about fitting it into trade deals.

Today the FT said the UK-Japan trade talks were being held up by international trade secretary Liz Truss’s insistence that stilton should be included in the negotiations.

Not content with getting tariffs slashed for her beloved pork and being on the verge of signing off on a sure-fire 0.07% boost to GDP, Truss has now chucked the blue-veined stink bomb on to the table, leaving Japanese negotiators reeling from the pong.

Why the last-minute cheesy surprise? Well, Truss is a renowned cheese-watcher, who shocked the viewing public in 2014 with a cringe-making speech bemoaning the UK’s dairy deficit and dependance on imported cheese – a position the-then Defra secretary branded “a…disgrace”.

Truss provided a clue to what’s afoot here in her statement on the progress of the negotiations on Friday.

“We have reached consensus on the major elements of a deal – including ambitious provisions in areas like digital, data and financial services that go significantly beyond the EU-Japan deal,” she said as she, no doubt, stared down the camera lens smiling wistfully.

Going ‘significantly’ beyond the EU-Japan deal is what this is all about. And, with most of the Vote Leave campaign incumbent in 10 Downing Street, it seems likely to become a feature of every single trade deal negotiation the UK enters into.

Significance is in the eye of the beholder, and the significance of getting stilton into the deal would largely be symbolic, rather than a game-changer in real terms for either the UK or Japan.

Stilton is a famous product that’s British to its mouldy rind and therefore, politically speaking, getting it involved in a big-name deal is going to provide a bigger political boost for Boris Johnson and Truss in the Brexit heartlands than the boring old ‘data’ we’ve already been given the green light on by our friends in the Far East.

Sure, stilton producers in the Midlands are going to be popping corks. Particularly seeing as they’ve had a pretty miserable pandemic, what with foodservice’s hiatus hitting demand. But as we sent only a smidge over £100k-worth [AHDB] of blue cheese to Japan last year, it’s hardly going to make a massive difference to anyone.

It hardly seems worth wrangling with Japan, whose apparent revulsion at the prospect of stilton is likely to be not so much the cheese itself, but that its deal with the EU only came into force in February last year, following six years of hard-fought negotiation.

To allow a much smaller cheese producer to come away with a better deal than a much larger one would destroy Japan’s cred in the cheese world. And as Truss herself said, this is “a time of heightened protectionism” – Japan needs to show it’s made of strong stuff when it comes to negotiation if it’s to be a serious player in trade. It can’t afford to roll over for a wheel of cheese.

If Truss gets the talks back on track and Japan comes around to the whiff of stilton, she’ll have done very well for very little. If Japan rejects the deal including it, she’ll look a bit silly.

Whatever the outcome, one thing is clear. Producers of ‘quintessentially British’ food and drink products should expect to be pawns in future negotiations. Now who’s up for a trade deal on baked beans?