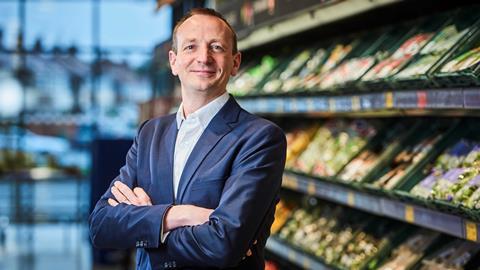 Tesco’s ‘tricks’ and the ‘joy of six’: what we learned from Aldi chief’s results presentation

After all, last year’s Aldi results presentation included a graph charting the rise in its market share over the past decade, against the decline of the big four’s.

But it wasn’t all bad news. The latest results revealed UK & Ireland revenues jumped 8.3% to a record £12.3bn in the year ended 31 December 2019, which was credited to an influx of new shoppers. Operating profits increased 49% to £291.2m and pre-tax profits were up 49% to £271.5m, reversing a decline in margins reported last year.

Here’s what we learned from Hurley’s presentation about the pressures on Aldi this year, what it’s doing about them, and the challenges ahead.

Aldi isn’t the only one that has taken a blow to its market share figures – Lidl has also seen its hard-won growth stall in the pandemic. In the case of both discounters, the trend has been widely attributed to missing out on the online boom seen by other supermarkets.

On whether it has held back Aldi, Hurley acknowledges: “Consumer habits have changed and we’re very simply evolving the business model to meet the needs of our customers.”

That evolution has taken the form of two separate trials. Until this year, Aldi’s online offer had been limited to GM ‘SpecialBuys’ and BWS, but in May – around the time its market share dipped as low as 7.7% – it launched a Deliveroo trial, which has since reached 20 stores. Hurley says this trial has proven particularly useful for stores without car parks in city centres.

That was followed last week by the launch of a click & collect service from a Loughborough store, which sees goods brought out to customers in the car park. It’s days away from a rollout to more branches, Hurley says. “Over the coming days we’ll make a further announcement about scaling to 15 stores, so that we can garner more information and undertake a more rigorous trial.”

For now, Hurley says it’s too early to confirm which of the trials will be the focus of its strategy. “Both trials are very exciting. They both offer different routes to customers. One is directly in our control, one is using a partner.”

Nevertheless, it’s click & collect that Hurley seems slightly more excited about. With Deliveroo, it’s a case of monitoring development “to see whether it’s something which we can scale”. But on click & collect, Hurley is “actually confident that we can make a success” of it.

“I think our unique business model, our extraordinary efficiency, can actually be applied to the picking and packing of groceries and click & collect provides a way of supplying groceries to the British public in a very cost-effective manner but also offers that convenience which our customers are increasingly looking for.”

A price war launched by Britain’s biggest retailer is probably a headache Hurley could have done without amid all the other challenges of this year.

The summer saw Tesco ramp up its ‘Aldi Price Match’ campaign – originally launched in March – by targeting the discounter across hundreds of branded products, as well as own label. Earlier this month, Tesco also relaunched its ‘Clubcard Prices Promotion’, giving members further price cuts of up to 50% on hundreds of lines.

“British consumers are, I think, pretty smart. They see through marketing tricks and gimmicks. They’re pretty savvy and they actually know the only place you can get Aldi prices is Aldi.”

The government’s latest Covid restrictions have heaped uncertainty on retailers, including supermarkets, ahead of the crucial ‘golden quarter’.

Hurley accepts it’s “really difficult to call” how it will play out, not least because “the joy of six does inevitably curtail traditional family gatherings”.

But he adds: “I’m really confident that British consumers will celebrate irrespective. Christmas is a hugely important part of the calendar here, more so I would say than in many other countries.”

In fact, Hurley argues that tightening purse strings will play in Aldi’s favour. “Our customers know we have the best value for money, and they know they don’t need to go anywhere else. This Christmas more than ever is a time, with that economic uncertainty, when we’re there for our customers.”

No sooner will the challenge of Christmas be over than supermarkets and shoppers could find themselves paying £3bn a year tariffs on food and drink, the BRC warned last week. That will be the bill from 1 January, should a deal not be reached between the UK and European Union, according to the body.

The wafer-thin margins of the discounters don’t leave much room for absorbing additional costs. So will Aldi have to pass it all directly on to customers?

Hurley claims Aldi has been increasing its capacity to “shield customers from any potential ripple effects” by sourcing even more products from the UK. “Over 75% of what we sell comes from British suppliers, producers, manufacturers and growers,” he says. “If anything, we’ve just been increasing that, very much with Brexit in mind.”

He also argues the discounter model itself is an advantage. “If you take the fact that we have approximately 2,000 lines and compare that to a more expensive retailer, which might have anywhere upwards of 40,000 lines, that gives us the ability to control and plan much more easily.”

Hurley doesn’t go quite so far as to dismiss price rises outright, but insists: “If there are any ripple effects, it will not change our commitment to have the lowest grocery prices in Britain.”