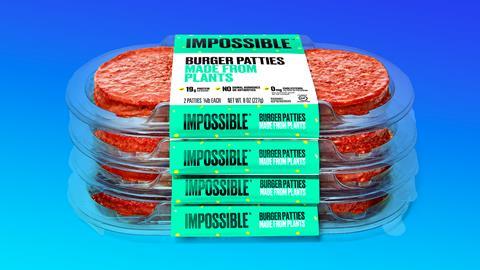 Given the regulatory hurdles it has needed to clear in the UK, the prospects of seeing Silicon Valley sensation the Impossible Burger for sale on our shores has so far looked, well… impossible.

But after years of waiting, today the cult vegan brand – made famous by its ‘bleeding’ vegan burger – announced it is eyeing a UK launch.

In a report published by The Times, Impossible’s chief legal officer Dana Wagner said the company had filed an application for approval with the Food Standards Agency earlier this year, which followed a similar (and so far unsuccessful) application with European regulators two years ago.

“The UK has said a lot of very positive things about being open for business, about wanting to be an innovation powerhouse, about being aware of climate change issues and wanting to lead on that,” Wagner said.

“We think we’re very consistent with all those agendas and hopefully it’ll be sooner rather than later, but that’s up to the regulator.”

As he suggests, that regulatory aspect has been the main issue behind Impossible’s failure so far to follow its contemporary Beyond Meat across the Atlantic.

Unlike most other so-called ‘fake meat’ brands, the Impossible Burger uses a high-tech compound called soy leghemoglobin, or plant-based heme, which gives Impossible’s line-up of plant-based products their meat-like texture and ‘bleeding’ appearance.

“Heme is what makes meat taste like meat. It’s an essential molecule found in every living plant and animal – most abundantly in animals – and something we’ve been eating and craving since the dawn of humanity,” Impossible says on its website.

The problem, however, is that this game-changing ingredient is made via the fermentation of genetically engineered yeast. And this GM element is what restricted its US presence to just foodservice until its launch into  supermarkets in 2019, and has slowed its overseas expansion plans (though it is now available in China, Canada, Singapore, Hong Kong and the UAE).

What will be interesting now, of course, is whether Impossible gets its wish to finally bring the brand to the UK. Wagner’s comments may be a sign that US companies with GM products are more confident of a way in following Brexit and a departure from EU rules.

But as we’ve reported recently in The Grocer, it may not be easy. The FSA has form for (rightly) taking its time to approve the sale of what it describes as “novel foods”. Just look at UK cultured meat startup Ivy Farm Technologies, which attempted to chivvy the regulator along back in May and be more “nimble”.

The FSA responded by stating its approach on these issues was to “fully assess the safety of products before they are legally allowed on the UK market”.

It’s a methodical approach the FSA has previously taken with products containing CBD and even raw cow’s milk. And even if Impossible were to gain approval, it will be entering what has become a very competitive UK plant-based market.

Meat-free sales grew by 28.8% last year to just over half a billion pounds, according to data for The Grocer’s 2020 Top Products survey. Sales have rocketed even further over the past year, driven by big gains – not just from Impossible’s US rival Beyond Meat but by UK brands that outperform it and are more affordable, such as Richmond, This, Meatless Farm and many more.

With most fast food chains also offering their own meat-free burgers, and even McDonald’s getting in on the act with its recently launched McPlant, the UK is now a maturing and sophisticated market which will be harder and harder to crack the longer it takes for Impossible to be approved for sale.

Will its ‘bleeding’ USP be good enough to sway UK shoppers? It’s not impossible, but Impossible still has a lot of hard work ahead if it’s to make a strong impression on the UK market.