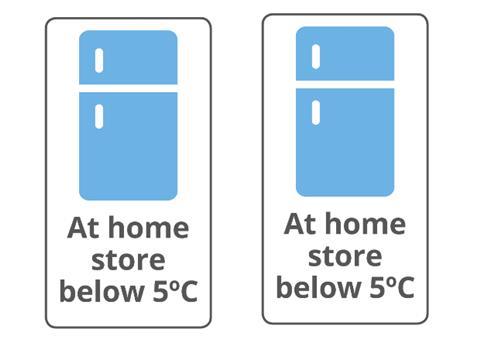 Seldom has so much ridden on the success of a logo than with the launch of the Little Blue Fridge, the new weapon against food waste.

Wrap, the FSA and Defra said today they believed this unremarkable new icon could prevent no less than £1bn, or 350,000 tonnes of household food waste per year, by tackling the huge problem of consumer confusion about how food should be stored.

So let’s hope the industry unites behind this most important of new logos and that there is more joined-up thinking on display than in last couple of days.

It does not bode well that, less than 24 hours before the unveiling of the new logo and landmark new guidance on use-by and best-before dates, the FDF released a document on its own.

Believe it or not, this was… new industry guidance on the use of use-by and best-before dates.

So: two entirely separate new pieces of best practice guidance. And while Wrap’s document did reference the FDF’s guide (albeit buried away on p25), the timing was far from ideal.

All parties involved furiously deny there was any falling out over this issue, and insist there has been plenty of joint working despite a long history of various sectors blaming each other for the extent of food waste – in which case it looks like a serious case of lack of forward planning.

Yet if the Little Blue Fridge is not to defrost dramatically, this is the sort of faux pas that needs to be avoided. All parties will need to get behind it and sing from the same hymn sheet.

A good start would be for retailers to come and declare they will start using the icon come January.

Retailers and suppliers are also being urged to warm, once again, to the use of the Snowflake Logo, used to show when products are suitable for home freezing.

If we get the same half-hearted efforts behind the Little Blue Fridge, the path to Wrap’s estimates will be very rough indeed.

Surely the example the industry needs to avoid following is that of front-of-pack traffic lights.

Even more so than the Little Blue Fridge, these were billed by the Department of Health as the answer to another crisis, that of obesity, but were hampered from the very start by a terrible lack of sign-up among suppliers, which means consumers still today face a bewildering mass of confusing messages on pack.

With the future of food labelling set to get even more uncertain after Brexit and conceivably become the subject of an almighty bunfight between different regulatory and industry bodies, it will take a lot of determination for the various parties involved to keep the Little Blue Fridge on packs and on track.

But if they succeed and it gets the message across that simple storage measures can go such a long way towards reducing the appalling extent of household food waste, it will be a battle worth fighting – and the Little Blue Fridge will be a most welcome new arrival to the shelves.