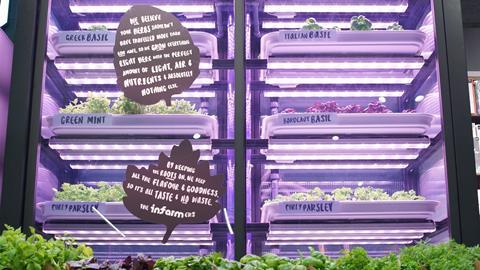 It’s hard to be different. That’s especially true in the world of supermarkets. Anything genuinely innovative tends to be quickly copied by your rivals and, ultimately, introduced by the discounters at a much lower price.

So if there’s one thing in favour of the M&S tie-up with Infarm, it’s a point of difference. Starting from today, customers at the M&S Clapham branch will be able to pick their own fresh herbs at its in-store ‘farm’. The initiative is set to roll out to six more stores by the end of the year.

It’s not only the first concept of its kind in the UK (Ocado has invested in vertical farms, but they’re not public-facing). It’s also unlikely to spread beyond M&S any time soon. Crucially, M&S has a UK exclusive on Infarm for the first six months – a timeframe that will be extended if M&S brings the concept to more stores.

Yes, the idea of an in-store herb garden seems pretty niche. The ability to pick your own herbs – including such delights as Bordeaux basil and mountain coriander – doesn’t seem like a crowd-pleaser on the face of it. But Infarm has already amassed nearly 200 locations across mainland Europe, which suggests it’s far more than a gimmick for M&S.

In depth: Is vertical farming the future of food?

That’s because the concept plays into what consumers want. We know freshness is an increasingly important factor for supermarket shoppers. And it doesn’t come fresher than picking your herbs straight from an in-store ‘farm’. That has the potential to mean far more than a jazzy herb section. The initiative shows M&S takes freshness seriously, which could improve perceptions of the brand on a wider level.

The concept also looks good. That may sound trivial, but in-store theatre has the potential to attract new shoppers – especially in the early, novelty stage. Considering M&S stores haven’t always been the most exciting, an in-store farm is a welcome addition.

Finally, there’s the issue of sustainability. Infarm says its system uses 95% less water and 75% less fertiliser than traditional soil-based agriculture. Just how much M&S will publicise that aspect is as yet unknown but, at a time when sustainability is a hotter issue than ever, it could prove a powerful selling point.