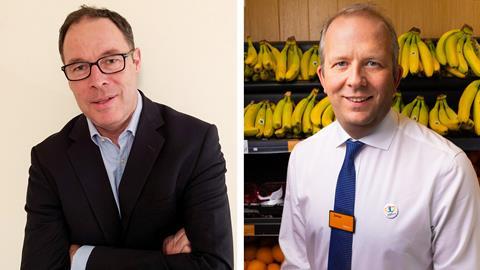 What challenges face the new bosses at Sainsbury’s and Tesco?

Mike Coupe’s decision to step down as Sainsbury’s CEO will not have come as a shock to many. His time in charge has been ticking down ever since last April when the CMA put the kibosh on his grand £51bn mega-merger plan with Asda.

There is a interesting subplot to examine in all this – that of Coupe and his Tesco counterpart Dave Lewis’ tenures.

Coupe, then a leading lieutenant to well-regarded Sainsbury’s boss Justin King, was named as successor when King announced his own plans to quit in January 2014. Coupe officially took the helm in July. Dave Lewis was parachuted into Tesco in September of that year, a month earlier than planned following a major profits warning.

Lewis was to receive a baptism of fire as the accounting scandal rocked the business just three weeks after he started.

Meanwhile in Holborn, Coupe was dealing with the far more prosaic issue of trying to arrest two quarters of sales decline.

Their starts could hardly have been more different, but many similarities would emerge as they steered the two giant grocers through some of the most turbulent years the industry has ever faced.

Both can point to transformative acquisitions among their highlights – Tesco bagged Booker to open up enormous potential in wholesale and foodservice, while Sainsbury’s capture of Argos appears a canny move in the age of Amazon.

On the other side of the coin, one of Coupe’s first strategic moves failed to pay off. Even before he officially became CEO he signed a deal with DSG to bring Netto back to the UK via a joint venture. Just two years and 16 stores later he would abandon the project, saying it would take enormous investment and rapid expansion to deliver a credible rival to Aldi and Lidl. Perhaps this is a lesson from the recent past for Tesco as it considers the future of its Jack’s discounter project.

Which brings us to what sort of shape Tesco and Sainsbury’s are in now Lewis and Coupe are bowing out. The good news is that neither business is a basket case, such as the one Lewis walked into in 2014. However, I would argue that there are more key issues for incoming Tesco CEO Ken Murphy to sort out than for Sainsbury’s operations director Simon Roberts, who will succeed Coupe.

Roberts has played a key role at Sainsbury’s over the past three years, not least managing the painful in-store management shake-up. He has also been involved in developing the current five-year plan, outlined by Sainsbury’s last autumn. The idea of this is to further integrate the Argos operations and focus on keener pricing and championing challenger brands, as well as looking to grow its wholesale presence. No doubt Roberts will bring his own ideas to the table in time, but there is a clear route forward.

Murphy, meanwhile, has to quickly get to grips with the Tesco business as an outsider. And he’ll have to do it fast: there is a decision to be made about whether to give Jack’s the investment needed for rapid expansion, or to call time on the project. There is also talk of a sell-off of some of its Asian businesses, once seen as its crown jewels.

Murphy can at least look to the excellent job done by his predecessor to reassure him that an outsider can make it work.

The overall challenges remain the same for both newbies. Sales are falling, Amazon is on the rise, Aldi and Lidl are still expanding and shopping habits are changing at a faster pace than ever before. The rollercoaster ride that was the Lewis and Coupe era is coming to an end, but the next chapter for Tesco and Sainsbury’s is likely to be just as compelling.