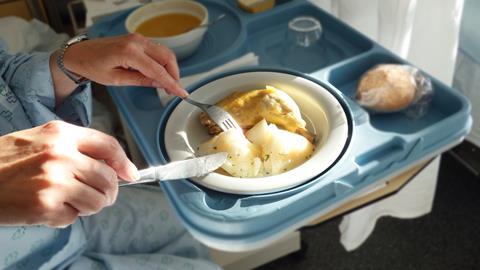 What the hospital meal furore tells us about frozen food perceptions

No one likes hospital food. As a general rule, it’s up there with airline meals in terms of unpalatable nutrition. Except you tend to be in hospital for longer than you’re in the air, and the experience is considerably less exciting than jetting off for a holiday.

Those negative perceptions have only worsened of late. First came the hospital food listeria outbreak in May, linked to the deaths of five people. Today, the poor PR stepped up yet another notch. That came with the chilling realisation that patients are being served – horror of horrors – frozen meals. ‘Hospital patients are eating meals cooked and frozen months before they’re served up’, screamed The Sun. ‘NHS patients being served hospital food that’s been in the freezer for a year,’ warned The Mirror.

It was as if the idea of long-lasting frozen food was some kind of Frankenstein invention, rather than a common sight in UK freezers. What’s more, both pieces made an implied link between frozen food and listeria. It suggested frozen fare was not only unpalatable, but also dangerous.

That’s clearly not true. The only risk with frozen food comes with failing to cook it properly. By contrast, there is a higher risk of listeria with cold, fresh foods such as salads and sandwiches – the kind of foods that presumably would go down better with the tabloids.

Why did it take a tragedy to prompt action on listeria?

Plus, we know cold chains aren’t up to scratch in hospitals. So giving them the responsibility to make their own fresh food – rather than leaving it in the hands of experienced food manufacturers – is unlikely to reduce the risk.

Despite the inaccuracies, these headlines are important to note. Because what they do highlight is the ongoing squeamishness around frozen food.

Yes, the sector has made plenty of progress thanks thanks to the likes of Iceland’s ‘Power of Frozen’ campaign and the Birds Eye marketing activity, which has consistently highlighted the quality of freshly frozen food.

And frozen ready meals – which hospitals have come under fire for serving – are gaining popularity among shoppers who aren’t bedridden. Last year, their value grew £9.1m, or 1.3%, to £686.2m [Kantar 52 w/e 7 October 2018]. The recent entrance of high-end brands such as Deliciously Ella and Bol into frozen ready meals shows it is no longer a sub-standard corner of the market.

But the latest furore shows many remain unconvinced that frozen is as good as fresh. Like hospital food, it is in need of some positive PR. Unlike hospital food, there are thankfully many experienced brands and retailers already on the case.