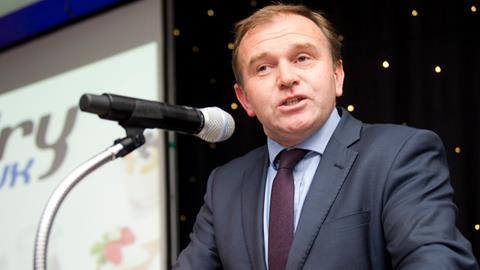 What will George Eustice bring to the role of Defra secretary?

George Eustice found himself in deep water within days of succeeding the sacked Theresa Villiers as environment secretary last week, as he fronted the government’s response to the record-breaking floods caused by Storm Dennis.

After large swathes of England and Wales and thousands of properties were deluged over the weekend, almost 150 flood warnings remained in place on Tuesday, with six severe flood warnings threatening a danger to life.

But Dennis isn’t the only storm the MP for Camborne and Redruth is facing.

Having spent the past six years in junior ministerial positions at Defra (barring a six-month hiatus last year in protest at Theresa May’s Brexit negotiating position), Eustice will be more aware than most of the challenges facing the food and farming sectors now that the UK has left the EU.

And a report published by the BRC yesterday spelled out the depth of uncertainty around Brexit that still dogs the sector.

Fresh food shortages and price rises were highly likely by the end of the Brexit transition period, warned the BRC’s A Fair Deal for Consumers report. Food and drink companies were likely to face food shortages and “disastrous” new tariffs, gridlock at the ports and a mountain of new paperwork by the end of the year unless the UK secured a trade deal with the EU, it added.

So what’s George Eustice like – and can he help steer the food sector through this Brexit uncertainty?

Given his experience at Defra, one thing that can be said about Eustice is that he’s a known quantity throughout the food sector. And his appointment was generally welcomed by industry bodies.

FDF CEO Ian Wright said he was “pleased” at the appointment, adding that Eustice would bring “a deep understanding of the sector and our priorities to the role”. He was also “well respected” for his knowledge and understanding of food and farming and for his hard work as a minister, added NFU president Minette Batters.

Eustice “knows what the industry is looking for”, says Vicki Hird, campaign co-ordinator for food and farming at NGO Sustain, and is “somebody we can work with”.

British Poultry Council CEO Richard Griffiths adds he has an “exhaustive depth of experience” related to the food industry, not least because of his own background in farming before becoming an MP.

Eustice, of course, is also known as a free trade-supporting former UKIP parliamentary candidate who campaigned for Brexit.

However, he is seen as a pragmatic Eurosceptic “that wants to make it work and is willing to compromise”, suggests one industry source who has collaborated with him.

“He’s realistic about the challenges Brexit will pose on the food and drink sector and will listen to opposing views,” adds another source.

One major challenge for Eustice could be raising the profile of Defra on the government’s agenda after it slipped during Theresa Villiers’ tenure, suggests the first source.

“He’s been a minister for so long, stepping up to secretary of state is a big jump,” they add. “He’s very competent but is he a big enough thinker? We haven’t seen that strategic ability yet, but as the figurehead at Defra, and with food and the environment such a hot topic, he needs to be a leader.”

The second source agrees he will need to raise the profile of Defra in Cabinet after the underwhelming tenure of Villiers. But they insist Eustice can get that message across, particularly when it comes to concerns over trade and access to export markets.

Eustice also has a strong ally at the Treasury in the form of close friend and new chancellor Rishi Sunak, they point out.

Another challenge will be to square his support for free trade with protecting the UK food sector from cheaper imports, adds Sustain’s Hird.

That challenge was perfectly encapsulated in this Guardian piece written by Eustice when he was on the backbenches last year, which described US agriculture as “backward in many respects”.

Now that he’s in the top job at Defra, those comments may well come back to haunt him in free trade negotiations, suggests the first industry source.

However, Hird stresses Eustice has made several other interventions to support UK production standards, including tabling a number of amendments to the government’s previous agriculture bill.

The BPC’s Griffiths agrees he’s talked a good game on upholding standards so far, but fears he may have a battle to get that message across after Boris Johnson dismissed fears over US food as “mumbo jumbo” earlier this month.

“Our challenge to George Eustice is to look at the food industry in this country and champion both affordability and availability of British food,” Griffiths says.

After so long auditioning for the job, Eustice is now in “the right place at the right time”, says Sustain’s Hird. But in a Cabinet seemingly hell-bent on playing hardball with the EU, he’s set to have a full in-tray.