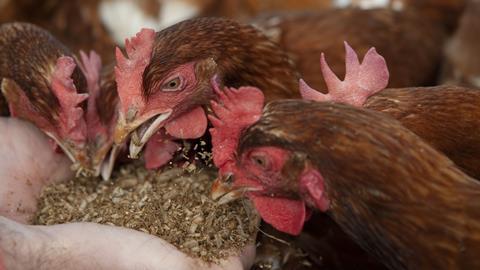 Why Morrisons’ insect-fed eggs could be just the beginning

Despite the long-standing hype, edible insects remain little more than a niche. They’re yet to overcome the stomach-churning factor – and they also face a mountain of regulatory hurdles.

But there is one area where edible insects are gaining real traction: animal feed. As meat and poultry supply chains look to reduce their dependency on deforestation-tainted soya-based feed systems, using insects is becoming an increasingly credible solution. That was very much the message in a report by Tesco and WWF last year, which spoke of the “huge potential” and environmental benefits.

Their joint Future of Feed report, published last July, suggested the total demand for insect meal from the UK’s pig, poultry and salmon sectors could soar to around 540,000 tonnes a year by 2050. It forecast as much as 16,000 tonnes of fishmeal and 524,000 tonnes of soy could be replaced – the equivalent of Tesco UK’s entire 2018 soy footprint.

That potential has only been underlined this week, with the launch of what Morrisons claims are the UK’s first carbon neutral eggs fed on insects. Costing 30p each or £1.50 for a pack of six, the Planet Friendly Eggs are initially available in 50 Yorkshire stores and Morrisons’ new “lower environmental impact store” in Little Clacton, with a national rollout planned for 2023.

It’s the result of a project first reported by The Grocer last December, which saw the retailer partner with Cambridge-based agritech business Better Origin to install its X1 insect ‘mini farms’, built in shipping containers, across a handful of Morrisons’ egg producers.

In what Morrisons describes as a “pioneering circular waste feeding scheme”, the insects are fed a diet of food waste sourced from Morrisons’ bakery and fruit & veg sites, before being served up to the retailer’s army of hens.

The first raft of these Planet Friendly Eggs come from a farm that has plenty of additional environmental credentials to boot. It uses a large wind turbine, 50kWh solar panels and a carbon sequestration programme to offset any remaining emissions – while 20% of its land is planted with trees.

The end product has been confirmed as carbon neutral by University of Cambridge scientists and will feature a green version of the normally red British Lion egg stamp.

How on-farm shipping containers could solve poultry’s soya problem from The Grocer on Vimeo.

Morrisons believes this type of initiative could be a game-changer as it seeks for all of its direct farm suppliers to be ’zero emission’ by 2030 – five years ahead of the rest of the supermarket industry.

It says the new egg line is merely the first to be borne out of its new net zero carbon farm models, which “look at neutralising emissions through the whole lifecycle and footprint of the farm”. Sustainable beef, lamb and fruit and veg lines will follow, it promises.

“We know our customers consider the environmental impact of the food they eat and want affordable zero emission produce,” says Morrisons head of agriculture Sophie Throup. “Eggs are a regular weekly purchase for most households, so we’re thrilled that after 18 months of hard work with our farmers these eggs are finally hitting our shelves.”

Given its fully-integrated farming operation, it’s arguably easier for Morrisons to take the lead on these kind of projects, while many in the food industry are still trying to get their head around cutting scope 3 emissions. But it also sets a standard for competitors. All eyes will now be on Morrisons’ retail rivals – and large egg brands for that matter – to see whether insect feed options become the norm.

Considering soaring feed prices have been crippling the egg sector over the past six months, adopting this kind of feed technology could not just have environmental benefits, but also offer greater input security for hard-up producers in the long run.

If that safeguards production across the British egg sector and other livestock categories reeling from the current cost of production crisis, it can only be a good thing.