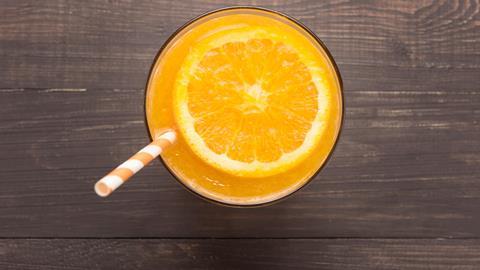 Why sugar concerns could hit juice harder than fizzy drinks

Starting your day off with a juice used to feel pretty wholesome. It’s one of the ‘virtuous’ options at the hotel buffet breakfast. After all, orange juice counts as one of your 5 a day. Put that together with the fried tomatoes and mushrooms in your full English, and you’re on to a winner. Follow that with a dose of hot caffeine, and you’re both nutritionally complete and ready to take on the day.

Except that wholesome feeling is starting to feel, well, a lot less wholesome. The health messages around juice are becoming increasingly confusing. On the one hand, juice companies are pushing its health benefits like never before. More and more blends are making functional claims – drink this and you will be more energised/uplifted/less prone to the office lurgy – based on their vitamin and mineral content. On the other hand, there are a rising number of negative headlines about the sugar content of juice.

The latest headline-grabbing study suggests a daily dose of juice could be detrimental, rather than beneficial, to our health. The study of 13,000 adults, published in the Journal of American Medicine at the end of last week, found a 12 oz glass of juice a day could increase the risk of early death by almost a quarter due to its fructose content. Worse still, it compared unfavourably with sugar-sweetened drinks such as cola, which was linked to a 6% increased risk of early death.

These mixed messages are causing confusion. That much is evident from a Google search for ‘juice’ and ‘health’, which brings up results ranging from a ‘juicing for health’ guide to a feature titled ‘Should I still drink fruit juice?’. It’s also telling that, when you search for Innocent’s Super Juice brand, one of Google’s suggested questions expresses doubt about its health-led proposition: ‘Is Innocent Super Juice good for you?’

One way to get around the poor PR of fructose is to use vegetables in juice blends – something Innocent has done with its Super Juice range. It’s an area that could be ripe with potential. Our exclusive research with Kantar last month found a quarter of consumers felt positively towards juices that contained veg. That figure was higher among parents and millennials. But even then, the health message isn’t getting across as much as it could do. Across the sample of more than 1,000 consumers, only 19% thought veggie blends were healthier than pure fruit juices and smoothies.

This consumer doubt is something the industry will need to tackle if it is to address stagnating sales. For even if juice is exempt from the sugar tax, it could feel the effect of sugar concerns just as much as – or even more so than – fizzy drinks. In the case of colas and lemonades, consumers are at least clear on what is ‘healthy’ and what is not. If you’re drinking a full-sugar cola, the levy (and common sense) indicate it’s not a healthy option. A sugar-free cola still doesn’t exactly scream health benefits, but it is clearly positioned as the more virtuous of the two options.

In the case of fruit juices, this clarity gives way to confusion. Which could prove particularly damaging for an industry that is using health messaging as a selling point.