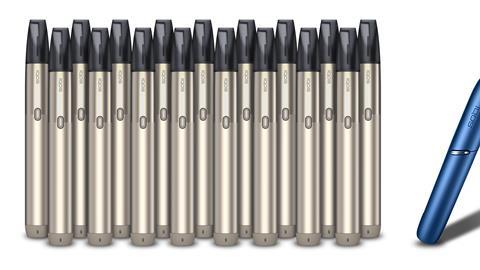 Last week Philip Morris International launched Iqos 3, the latest iteration of its heat not burn device. Potentially just as interesting, it also unveiled its first ever vaping product under the brand, the new Iqos Mesh.

So why is the tobacco giant getting into vaping? And what does it say about the chances for its heat not burn version?

He also dismisses the idea that moving Iqos into vaping is a signal that heat not burn isn’t working in the UK. The brand enjoyed enormous success when it launched in Japan, where there were far greater restrictions around e-cigarettes and therefore no established vaping market, unlike the UK.

“I absolutely believe there is massive potential for heated tobacco in the UK,” he explains. “Vaping has been around for about 10 years and 6% of the population vape. But 15% of the population still smokes. Of smokers that switch to Iqos, 70% quit smoking. For e-cigarettes it’s 20%.”

Still, he admits challenges remain for its heated tobacco lines, which first launched a year-and-a-half ago.

“If any CEO tells you something has delivered or exceeded expectations they are probably lying. Until I have most of the market I won’t be happy.”

But he is “very happy” with metrics such as the conversion rate of those who try Iqos and stop smoking cigarettes.

“We grow week on week steadily,” he adds. “It’s not the levels of Japan, they have four years on us and it’s a different environment, but it’s growing.”

The biggest issue is the restrictions it has in communicating Iqos heated tobacco products to the public.

“That is our big bottleneck. There are a lot of smokers out there who just don’t know this exists, and they think ‘oh I tried vaping and it didn’t work for me’. But that might have been 10 years ago. There is a lot of work to educate people that e-cigarettes and heated tobacco is so much better than that now.”

Iqos heated tobacco devices are still sold predominantly through specialist vape shops, along with three Iqos stores in London, and a website. The frustration is that only a small number of independent retailers stocking it really understand the product and are able to take the necessary 20 to 30 minutes to fully explain to a new customer how it works. (The Heets refills are sold in over 10,000 stores, including Sainsbury’s.)

He has also been encouraged by the findings of a Public Health England review last year, which said Iqos appeared to be a reduced risk product compared with traditional smoking. PHE is set to continue to review the evidence annually. “I think it will come,” he says. “But we have been in the market for a year-and-a-half and regulation takes time.”

While that is ongoing, it has unveiled Iqos Mesh, the brand’s first vaping device, which doesn’t require the same levels of customer education and can be sold more widely across traditional channels. It has so far been introduced to Sainsbury’s stores ahead of a wider rollout.

One rival vape executive this week predicted Mesh would do well, not least because Philip Morris “has plenty of money to throw at it”.

Crucially, vaping is growing exponentially: the number of vapers has risen from 600,000 in 2011 to 3.2 million in 2017 (ASH: September 2018) and is predicted to be worth £4bn by 2022. And while the vaping market seems crowded, PMI will also be encouraged that no player currently has “most of the market”. While figures from vape shops and online, which account for the majority of sales, are unavailable, the £184m sales market in grocery at least is spread among a wide range of players, led by BAT’s Ten Motives with 20% share.

On the other hand, the startling early sales success of vaping rival Juul in Sainsbury’s (in 10 weeks it’s already number one, it reports), and its dominance of the US market, suggests that Iqos Mesh has a battle on its hands - because Juul isn’t short of a bob or two itself.