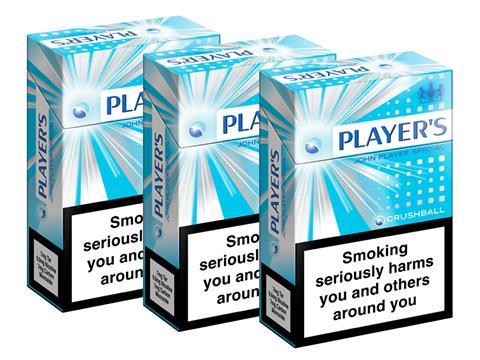 In June, Imperial Tobacco tapped major trends in the cigarette market with Player’s Crushball. The cigarettes feature capsule technology that allows smokers to change the flavour of their smoke mid-way through, a type of product that now accounts for almost 10% of the RMC market. Player’s also falls into the value sector and, available in 18s and 10s, it ticks the box in terms of smaller pack formats as suppliers look to keep a lid on prices in the face of continued tax increases.

The recovering economy has had little impact on the purchasing habits of smokers, who continue to seek value when it comes to both ready-made cigarettes (RMC) and roll-your-own (RYO). The focus on lower prices has created three distinct sub-sectors within the value segment - value, super value and ultra value - according to JTI. Together they account for 55.1% of UK RMC volume.

In April the display ban came into force for small stores and, while retailers seemingly adjusted well, the change proved costly, with a third of c-store owners telling The Grocer in October they had lost sales as a result.

Nielsen figures at the time showed local shops were losing out to the big supermarkets because in a completely dark market there was a perception among consumers that bigger shops would offer better value. While cigarette sales were down 2.7% in supermarkets, they fell 7.7% in impulse; RYO sales were up 1.2% in supermarkets but down 3.1% in convenience.

Unsurprisingly, the past year has been tough for most of the leading brands. Nine of the top 10 cigarette lines are in volume decline, while seven are down in value. Leading brand Sterling, a value line, held its own with value up 5% and volume down 1%. The biggest loser in terms of total sales was Lambert & Butler Silver, which crashed £292m. It seems smokers have switched to value brand Lambert & Butler Blue, which has risen £252m.

Rippleglen group buying director Laraine Jones says the downtrading trend has been plain to see in its stores. “For all the time I have been buying tobacco, Lambert & Butler 20s have always been our top-selling SKU,” she says. “Earlier this year it was pushed into number two by Carlton Red Superkings and it is now down to number four. The rest of the top 10 are all sub economy.”

Value is also the key sales driver for RYO, with smokers trading down from ready-made cigarettes, and regular RYO smokers seeking cheaper alternatives. The strongest growth came from Sterling Rolling tobacco, up 24% to £45.9m. However, according to Jones, the big three of Amber Leaf, Gold Leaf and Golden Virginia Original make up 73% of the group’s total RYO sales.