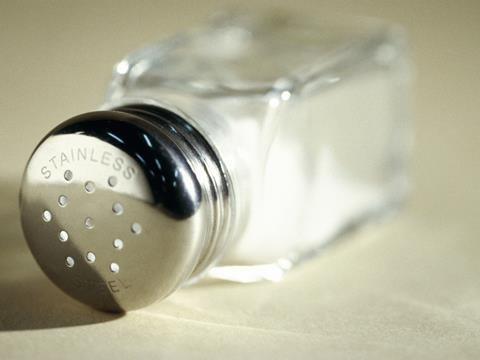 Aldi and The Co-operative Group have become the first supermarkets to sign up to the latest Department of Health targets on salt reduction, as a wave of new signatories provide fresh hope the troubled strategy is starting to gain momentum.

The two retailers have backed the new targets, which pledge to bring the UK’s intake of salt down to no more than 6g salt per person per day by 2017 compared with the existing average of more than 8%.

“Aldi is committed to making it easier for customers to lead healthier lifestyles, at no extra cost, and without compromising on taste or quality,” said Giles Hurley, MD of corporate buying at Aldi UK. “We see the 2017 Salt Reduction Targets as a continuation of this strategy.”

Campaigners said they had not expected Aldi to back the new pledge because the retailer had hit less than half of its 2012 salt targets (30 out of 70) and recently warned the DH its moves to reduce salt were being hampered by its business model.

“It’s pleasantly surprising that Aldi is one of the first supermarkets to sign up to these new targets,” said Sonia Pombo, a nutritionist at Consensus Action on Salt and Health.

“It sends a message to other supermarkets, like Tesco, Sainsbury’s and Asda that they too should be committing to these targets and hopefully this will be a push for them. The sign-up to this pledge has been extremely slow, but there are signs that it is now beginning to pick up.”

A spokeswoman for the DH said things were looking “more promising” for the pledge, which covers targets across nearly 80 different food groups,

Other companies that have also signed up include Mars UK, Nestlé, Heinz and Premier Foods, as well as several restaurant and foodservice companies.