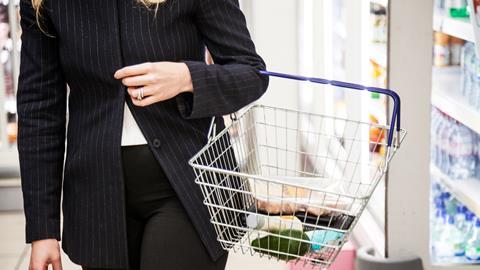 In the era of little and often shopping, consumer expectations of convenience are growing. Ever more shoppers are looking for last-minute dinner options. That’s requiring stores to stock more fresh, reasonably priced produce, and inspiring some innovative thinking.

1. Value for money is by far the most important factor to shoppers 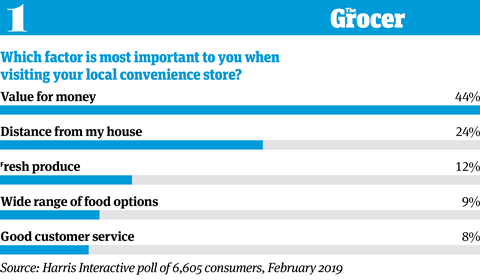 At first glance, these figures aren’t particularly surprising. Price is typically the most important factor for grocery shoppers, so it stands to reason that they’re looking for value in a convenience setting. Equally, you would expect them to prioritise distance from their homes, which could make or break the whole convenience proposition.

But the demographic differences are less predictable. Despite growing up with self-service tills, the younger age group is more likely to value good customer service. While 12% of the 18 to 24 age group said this was the most important factor for them, only 6% of over-55s said the same.

This younger age group is also more willing to travel for what they want. Distance was the most important factor in a convenience store for just 19% of 18 to 24-year-olds, compared to 30% of respondents aged 55 and over.

2. When it comes to meal options, price perceptions are mixed 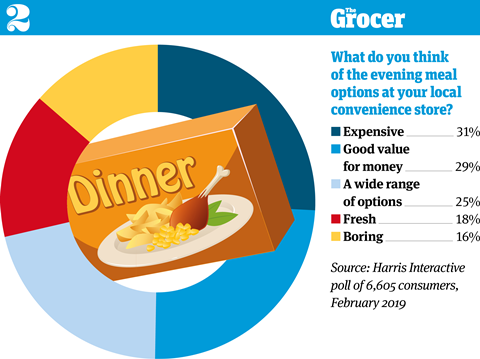 If price is the most important factor to convenience shoppers, then the below figures make for sobering reading. For expensive was the most common adjective used to describe evening meal options. Nearly a third believed they were on the pricey side.

In terms of regions, Londoners were the least likely to have cost concerns. Only 26% described evening meals as expensive, compared to 34% of respondents in the north west and south west. “City dwellers are less likely to have the option of shopping at large supermarkets and so may be more accustomed to convenience store prices,” says Lucia Juliano, head of retail research at Harris Interactive. 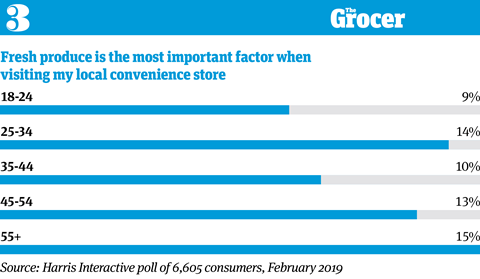 Here’s a surprising age split. You might expect the youngest consumers to be most concerned about fresh produce options at their local convenience store. After all, this is the generation famed for its moderate approach to alcohol and its zealous approach to wellbeing.

However, the opposite is true. Only 9% of 18 to 24-year-olds named fresh produce as the most important factor when visiting their local convenience store, compared to 15% of shoppers aged 55 and over.

These different priorities may be influencing consumer perceptions of what’s on offer. For younger shoppers were also less critical of the freshness of evening meal options in their local stores. Nearly a quarter of 18 to 24-year-olds described the evening meal options on offer as fresh, compared to 13% of consumers in the 55-plus age range.

4. There is room for improvement in the fruit & veg offer

Convenience stores haven’t traditionally had the best reputation for fresh produce. And it seems many consumers still aren’t happy with what’s on offer, despite stores upping their efforts in this area.

Overall, nearly a quarter of shoppers were unhappy with the range of fruit and veg on offer at their local store. That compares with relatively high satisfaction levels for ambient options such as store cupboard essentials.

Again, there were some demographic differences here. In Scotland, 31% of respondents were dissatisfied with the fruit and veg on offer in their local convenience store, compared with just 18% of respondents in London.

And given their appetite for fresh produce, older consumers were also more critical of the fruit and veg offering. Among the over-55s, 27% were dissatisfied with what was on offer.

5. Demand for a meal for tonight is particularly high in London 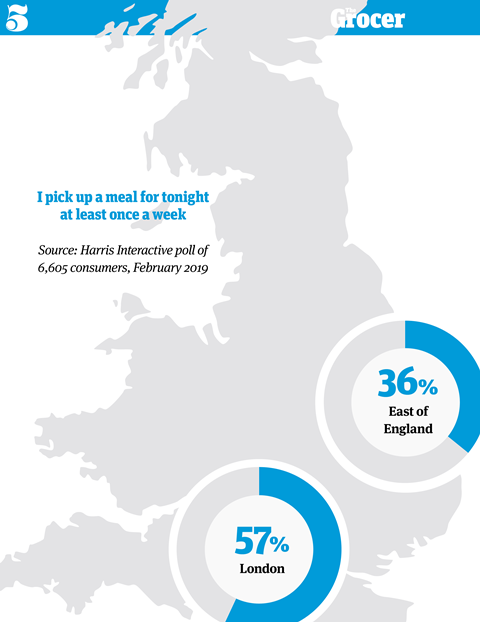 The capital is the home of ‘little and often’ shopping. So it stands to reason that a particularly high number of Londoners are picking up meals for tonight. For over half of the city’s residents, it’s at least a weekly habit. And as many as 15% will pick up a meal for tonight every day.

Elsewhere in the country, it’s a far less regular occurrence. In the east of England, for example, just over a third of consumers will pick up a meal for tonight at least once a week. And only 3% make it a daily habit.

6. The nation is veering towards last-minute dinner options 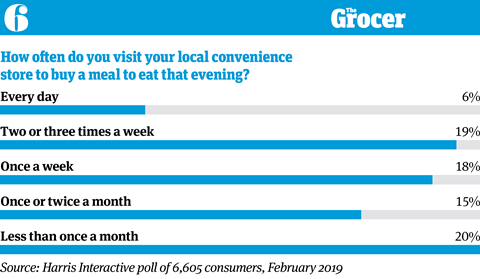 The capital may be the king of the meal for tonight, but there’s a nationwide trend towards last-minute dinner decisions. A quarter of the nation will visit a convenience store more than once a week to pick up a meal for that evening.

That trend only looks set to grow, if the younger generation is anything to go by. The under-35s are the most regular visitors to convenience stores to find a last-minute meal. A whopping 16% of 25 to 34-year-olds will do so on a daily basis, and 45% make a visit more than once a week. Among 18 to 24-year-olds, that figure falls only slightly to 40%.

The growth of the impromptu dinner is indicative of the pressures of modern life, says Harris Interactive’s Juliano. “With increasing pressures of long working days and busy schedules, it’s not surprising consumers are finding less time to shop in advance,” she says.

7. Consumers feel confident in finding enough for a family meal 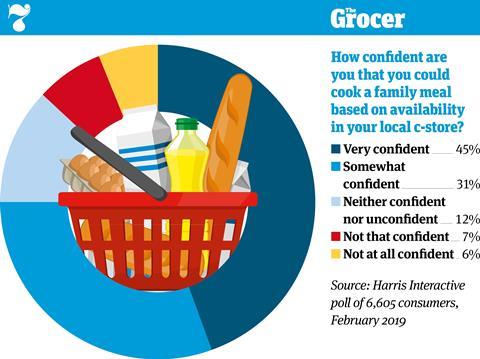 Three quarters of shoppers are at least somewhat confident they could whip up a family meal based on what is on offer in their local convenience store. That leaves only 6% who are not confident at all in the ranging.

That confidence is present pretty much across the board, but there are some slight demographic differences. Again, it’s typically younger consumers and Londoners who feel most positively towards convenience stores.

Nearly eight in 10 shoppers in the capital feel at least somewhat confident they could find enough for a family meal, a sentiment that is shared by 78% of shoppers aged between 28 and 34.

8. Nearly half would be interested in a hot takeaway option 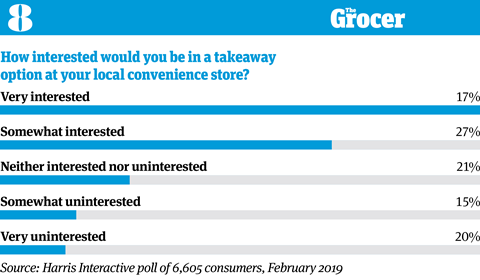 Of course, the ultimate last-minute evening meal is a takeaway. So if consumers are rushing to convenience stores for a dinner for tonight, could they be the perfect place to offer a takeaway?

Dr Oetker seems to think so. In January, it rolled out Chicago Town pizza to go – essentially a hot pizza counter designed for convenience stores – on a nationwide basis. Given that the takeaway market was worth £8.1bn in 2018, according to AHDB, it could be potentially lucrative.

The numbers suggest there is demand. Indeed, 44% would be at least somewhat interested in the concept.

Certain areas of the country offer slightly more opportunity than others. In London, 54% of consumers expressed an interest in a takeaway, and that figure stood at 48% in the north east. By contrast, only 35% of those in the east of England and 40% of Scottish consumers would be open to the concept.

9. Younger consumers are particularly open to the takeaway concept 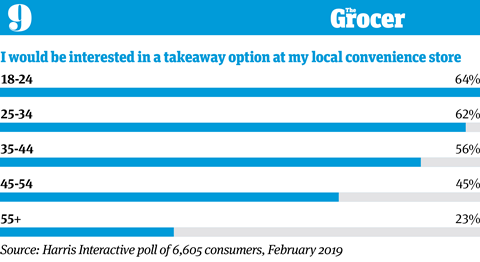 Younger consumers are a driving force behind Britain’s takeaway boom. So these shoppers are naturally more open to a convenience store takeaway. Nearly two thirds of the youngest age group are at least somewhat interested, compared to only 23% of the oldest.

“This high level of interest coupled with the proportion of young people buying their evening meal from their convenience store suggests there is a market,” says Juliano. “However this is a very competitive market with companies such as Deliveroo being so readily accessible.”

10. Chinese and pizza are the most popular options for a convenience store 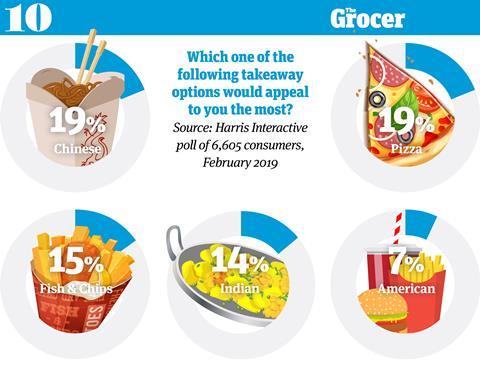 Chinese was named Britain’s favourite takeaway in a Channel 5 programme in April. Our research doesn’t dispute that. Indeed, Chinese was the joint most popular alongside pizza for a convenience store offering.

But the low percentages in favour of these options – Chinese and pizza had 19% each – shows just how much tastes vary. A similar percentage would favour fish & chips and an Indian takeaway.

There is also support for less conventional options. Our research found 4% would be interested in Thai, 3% would like Mexican, 3% voted for Japanese and another 3% would go for pie & mash.

And smaller numbers voted for options such as Turkish, Lebanese and Korean cuisine. Which goes to show that choosing the right takeaway option could prove a tricky task.