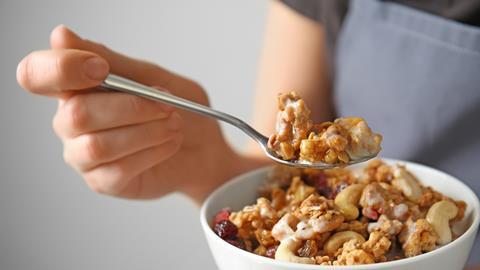 The pandemic has created a seismic shift in Britain’s breakfast habits. The nation is spending more time preparing meals at home, while on-the-go options have suffered. So what options are prevailing among locked-down Brits? And who is most concerned about healthy eating?

This research was commissioned by The Grocer and carried out by Harris Interactive independently from Mondelez International.

1. A third of Brits haven’t skipped breakfast once since lockdown first began 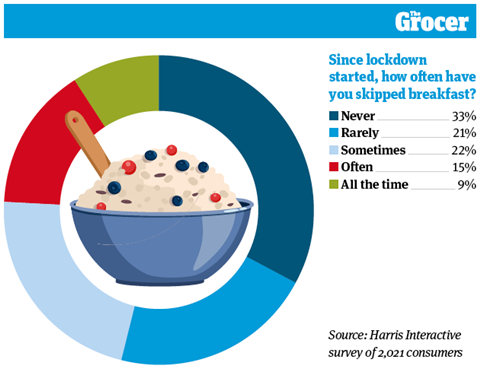 Sticking to a routine was mooted as the best way to survive lockdown. Brits seem to have taken that mantra to heart, as 33% of respondents to our Harris Interactive survey say they haven’t skipped breakfast once since they were confined to their homes.

The older generations have been particularly wedded to their morning routine. Nearly 50% of the 55+ age group say they haven’t skipped breakfast once since the beginning of lockdown. On the flipside, only 18% of over 18 to 24-year-olds said the same.

This younger age group emerged as far more erratic in their breakfast habits. Nearly a quarter said skipping breakfast was a regular occurrence, and a further quarter said they missed breakfast sometimes. By contrast, only 9% of the over-55s often went without breakfast, and 14% sometimes went without.

2. Breakfast has grown in importance among the younger generation 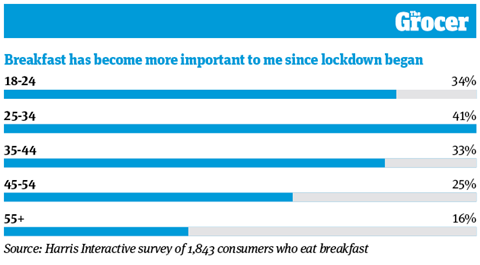 Granted, younger people are likely to skip breakfast more often than their older counterparts. But that doesn’t mean the meal is losing its appeal among this generation. In fact, a third of 18 to 24-year-olds say breakfast has become much more or slightly more important to them since lockdown hit. That figure rose even higher to 41% of the 25 to 34-year-old age group.

Among the over-55s, only 16% said breakfast had become more important to them – presumably because it was already a firm part of their routines before the crisis began.

Interestingly, Londoners emerged as another group that re-evaluated the importance of breakfast during lockdown. In the capital, 41% of respondents said the first meal of the day had become much more or slightly more important to them, compared with 21% in the south east overall.

3. A third have spent more time making breakfast during lockdown 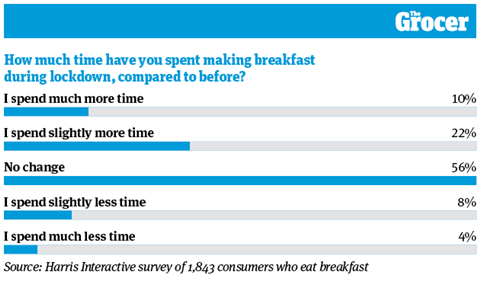 The daily commute largely became a thing of the past during lockdown. So naturally, Brits were able to spend more time making their breakfast rather than rushing to the office.

Although 56% of respondents said their length of their breakfast routines had remained the same, a third said they had upped their prep time since lockdown hit.

Again, this depended widely on demographic. Perhaps unsurprisingly, Londoners seemed most affected by ditching their long commutes and the closure of food-to-go outlets. Nearly half of those in the capital said they spent much more time or slightly more time making breakfast since lockdown hit. Similarly, half of 18 to 24-year-olds said they had spent more time in the kitchen during the crisis.

4. That has presented a challenge for on-the-go options 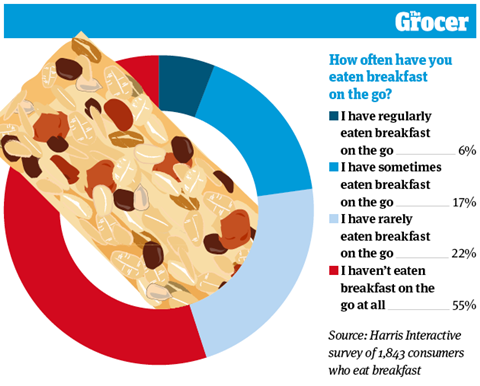 Brits were very rarely on the go during lockdown. So it’s little surprise that on-the-go breakfast options suffered as a result.

Over half of respondents to our survey said they hadn’t eaten a grab-and-go breakfast at all since lockdown began, while only 6% said they regularly did so.

The decline wasn’t quite so pronounced among all demographics, though. Among the 25 to 34-year-old age group, 32% said they had sometimes eaten breakfast on the go, and a sizeable 14% said they had done so regularly.

In London, as well, there was greater uptake of these formats. A quarter said they had eaten breakfast on the go sometimes since lockdown hit, while 9% made it a regular habit.

5. However, that market is set to pick up again as lockdown eases 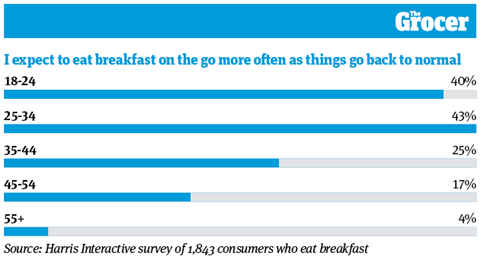 As the below chart shows, that intention is highest among the younger generations. Four in 10 of the youngest age group said they would eat breakfast on the go much more or slightly more often, compared with only 4% of the 55+ age group.

That’s not the only demographic difference at play here. A slight gender split emerged in intentions. While a quarter of men said they expected to go back to grab-and-go breakfasts, only 18% of women said the same.

Finally, there were some regional variations. While just 15% of respondents in the south east expected to eat breakfast on the go more often, that figure rose to 33% in London.

6. A healthy breakfast is important to the majority of Brits 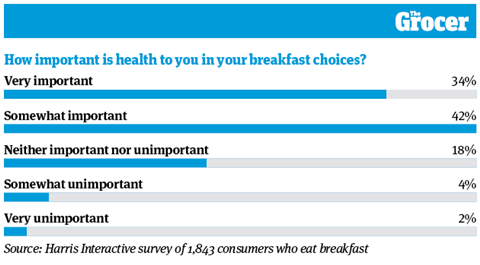 When lockdown first hit, indulgent items such as bacon, eggs and chocolate spread became popular on breakfast tables, according to Kantar. But as time has gone on, that indulgence has given way to mounting concerns over health.

Our poll reflects this shift in mindset. Three quarters of respondents said health was either very or quite important in their breakfast choices. That figure rose to 80% among female respondents, and 83% among the over-55s.

Mondelez says this fits with its findings. “While people have had to alter how they live and work as a result of the pandemic, a focus on living healthily has continued to be important,” says trade communications manager Susan Nash. “Demand for healthier snacks is growing as it was pre-pandemic, with 31% of all snacking occasions now categorised as ‘healthy’, with those occasions peaking during mornings.”

7. Londoners would be most willing to compromise on taste in the name of health 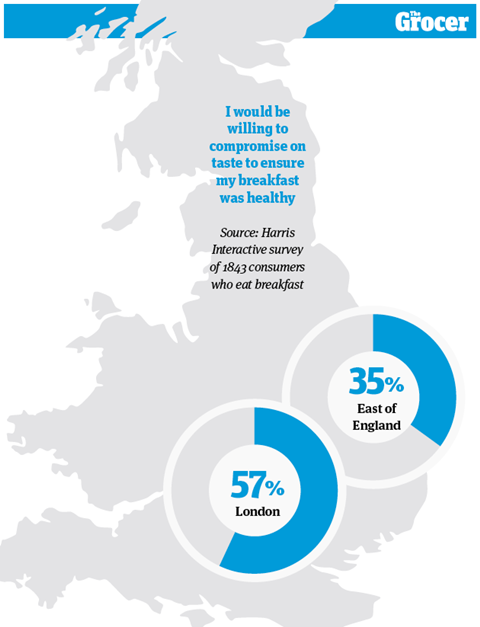 London is the capital of healthy eating, if its breakfast habits are anything to go by. There, a sizeable 57% of respondents said they would be willing to compromise on taste in the name of a healthy start to the day.

Across the total sample, 43% of respondents said the same. Only 11% described themselves as very willing to sacrifice taste.

Mondelez says shoppers tend to want both. “Consumers are looking for a product that strikes the right balance in delivering against health and taste requirements,” says Nash.

8. Younger consumers have become especially health-conscious in the wake of the pandemic 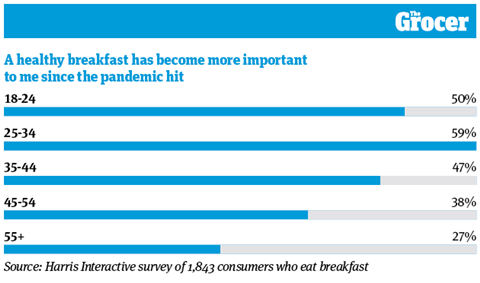 Older people have been particularly vulnerable to the severe effects of Covid-19. So it is perhaps surprising that healthy breakfasts have particularly grown in importance among younger consumers.

Nearly 60% of the 25 to 34-year-old age group said a healthy breakfast had become either much more or slightly more important to them since lockdown hit, and the government upped its messaging around a healthy diet.

By contrast, only 27% of the 55+ age group said the same. That’s markedly lower than the total sample. Overall, 40% said a healthy breakfast had become more important to them.

That doesn’t necessarily mean older consumers don’t care as much, though. It also reflects that many in this age group were concerned with a healthy breakfast before the pandemic hit.

9. There remain doubts over the idea of a breakfast drink 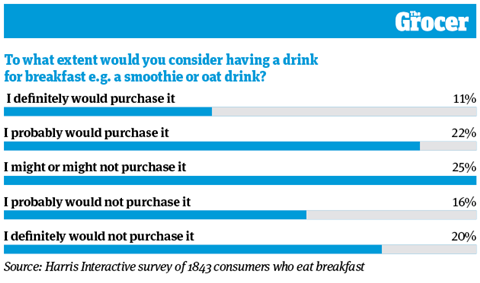 Breakfast drinks are no longer a novelty. A number of established brands have had their own liquid breakfast options on the market for years.

Yet there is still an element of trepidation among consumers. Only a third said they would definitely or probably purchase a breakfast drink, while a fifth ruled it out altogether.

There is a greater appetite among certain demographics, though. Half of the younger demographics – that’s the 18 to 24 and 25 to 34 age groups – said they would definitely or probably purchase a breakfast drink. That fell to only 15% of the 55+ age group.

Breakfast drinks are also more popular in London, where on-the-go options are more prevalent. A significant 45% of respondents from the capital said they would definitely or probably purchase one, compared to 22% in the east of England.

10. Oats are the most popular ingredient for a healthy breakfast 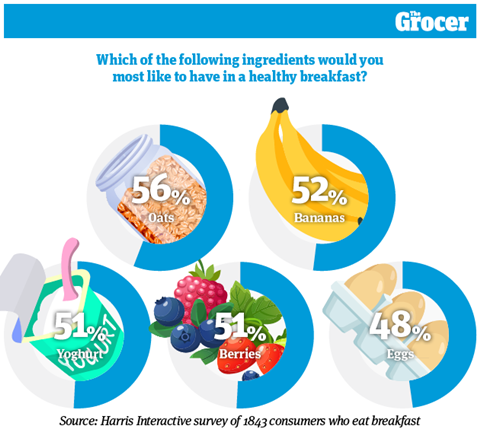 Porridge has been a popular option during lockdown, as many brands have reported unprecedented sales of their bulk packs. So it stands to reason that oats came out as the most popular healthy ingredient on our list, whether as a basis for porridge or an ingredient for a breakfast bar.

Meanwhile, bananas were the most popular fruit option. That was closely followed by berries, which were also named as a desired option by just over half of respondents to our poll.

Yoghurts and eggs fared similarly well, gaining around half of the vote.

There were more variations when you boil down to the different demographics, though. Oats fared particularly well among women and older consumers. Six in 10 women named oats as a desired ingredient compared with five in 10 men. And 60% of respondents aged 55+ favoured oats compared with 43% of 18 to 24-year-olds.

Among this youngest age group, eggs were more popular. Fifty-two per cent of this demographic chose eggs as a desired ingredient, compared with 43% of 55+ respondents.

Eggs were also most popular in Scotland, where 59% named them a key ingredient of a healthy breakfast. That compared with just 39% in the east of England.